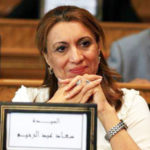 Souad Abderrahim was officially elected mayor of Tunis, winning 33.8 per cent of the vote during the municipal elections in May, and then the vote of 26 municipal councilors against her opponent’s 22.The 53-year-old beat Kamel Idir, a candidate of the Nidaa Tounes party, founded by the Tunisian president, running as an independent under the ‘Muslims Democrat’ party Ennahda, Middle East Eye reports. The party won 25 per cent of the votes and 21 out of 60 council seats in Tunis during May elections.
Tunisians are praising Abderrahim, who is head of a pharmaceutical company, on making history for another reason”being the first female mayor of an Arab capital. Abderrahim is the first elected mayor of an Arab capital, though there are two other female mayors worth noting: Layla Mohammed, who became co-mayor of the Syrian town of Tal Abyad, and Zekra Alwach, who was appointed mayor of Iraq’s capital Baghdad, the first woman to hold such a position in the country’s 1,250 year history.
(Source: themuslimtimes.info)