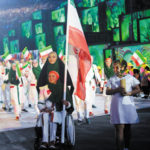 When archer Zahra Nemati carried the Iranian flag into the Maracana Stadium in Rio de Janeiro, she broke new ground for the Muslim country. Never before had a woman led Iran’s team into the parade of athletes in an Olympic opening ceremony. In Iran, female fans are traditionally barred from attending male-only sporting events. Arriving in the stadium in a wheelchair, wearing a green head covering, Nemati was the flagbearer for a team made up overwhelmingly of men. It’s quite a way for the 31-year-old Nemati to make her mark on her first Olympics.