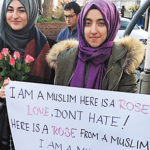 London: Recently, a stabbing took place at a train station in Forest Hill, London. The attacker, 38-year-old Adrian Brown, reportedly shouted, “I want to kill Muslims” during the act. Brown has been charged with attempted murder, possession of an offensive weapon, and assault by battery after his arrest. And while it may be easier to respond to hate with hate and nasty words, some Muslim women are taking the high road. A young Muslim woman named Iysha and a few of her friends decided to spread a message of love by passing out roses at Forest Hill Station.