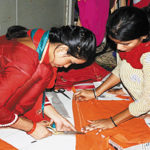 “Wujood-e-zan se hai tasveer-e-kainaat mein rang,” (The colours of the universe are there because of the existence of womankind)
— Allama Iqbal

A mother is a school. Empower her and you empower a great nation.
“Hafez Ibrahim, Egyptian poet (1872-1932)

We live in a world in which women live in poverty, face gross inequalities and injustice from birth to death. From poor education to poor nutrition to vulnerable and low pay employment, the sequence of discrimination that a woman may suffer during her entire life is unacceptable but all too common. Societies that invest in and empower women are on a virtuous cycle. They become richer, more stable, better governed, and less prone to fanaticism.
In India, community groups set up in villages and slums to tackle specific problems are known as self-help groups. One of the primary objectives is of course to avail loans which the women access by cross guaranteeing each other’s liability. These loans are part of a financial philosophy called microfinance. When we place capital in the hands of women, especially low-income women who don’t have access to loans through traditional means, it works wonders “ unlocking her entrepreneurial impulses. We help empower not just women, but the communities in which they live.
Grit and Tenacity of Poor Women
I have spent four decades in microfinance and have been amazed at the grit and tenacity of poor women in battling out of poverty in the face of severe odds. The first woman to whom I offered a choice was Samina who thought she must opt for it rather serve a lifetime of hell in the company of her cruel husband who used to blow up the entire precious and bare savings in smoking and gambling. Intent on providing a better life for her children and surviving as best she could, Samina started a business, selling soybeans. Samina has little education, but with a first loan of 2500, she purchased a few kilo bags of soybeans to sell to retailers. She enrolled right away.
Set in a gritty, dusty, village in Pulgaon, near Nagpur, Samina runs her business out of her house, which clearly required the addition of a couple of small rooms. In the inner courtyard of her house, an elderly woman cleans the soybeans by passing it through a homemade tin strainer. The 150-kilo bags of cleaned soybeans are stacked floor to ceiling, filling two rooms. Each bag is carefully weighed in an old scale and divided up into smaller bags. Two young male employees deliver these bags throughout the city, carrying them in ancient, wooden, hand-pulled wagons.

Samina’s Humble Story
Samina’s two daughters are at a university, and she also takes care of her aging mother and aunt, both of whom I met. “Now everyone comes to me to borrow money: the same people who used to criticize me,” Samina said, beaming in satisfaction. “And the children of those who used to criticize me now come to my house to watch TV.”
Now, many loans later, Samina’s business employs several people and sells considerable quantities of rice, ground nuts, and beans.
Samina’s humble story, at first, strikes little interest in a passerby. However, played out over and over again in markets, slums, and villages, it shines as a compelling and inspiring story of resolute perseverance, of the power of the human spirit, and of the dignity of so many people struggling to escape the enduring grasp of poverty.
Samina rose to become an elected village sarpanch, a rarity for a Muslim woman. I visited her village recently and was wonderstruck by the transformation she has brought about. There’s a bank, a school, women are out of the house and working on village improvement projects such as sanitation systems and vegetable gardens. They have started small businesses. People eat more nutritious food, they use mosquito nets and repellents to ward off mosquitoes.
They know they must boil water for drinking to protect the family from waterborne diseases. Even more remarkable is the social transformation that the movement has wrought. No one drinks. Only a handful smoke. There hasn’t been a crime here in years. Even the practice of untouchability has weakened. The village is brisk and prosperous.
In most parts of the country Muslims have not leveraged this programme despite the fact that we have exclusive agencies for focusing on minorities”National Minorities Development and Finance Corporation (NMDFC) at the national level and Maulana Azad Minorities Financial Development Corporation (MAMFDC) at the state level. Microfinance, or group-based loans, is the key component of their programmes. At most centres where these programmes have been implemented, political activists have subverted the development agenda and turned them into a populist game.

Power of Mentoring
One positive development in Nagpur’s community space is that several retired senior professionals drawn from various fields have actively associated themselves with various initiatives of the community for mentoring the target groups. Since these professionals are familiar with the governance processes, they can enable the aspirants to take the right step on the right ladder. If there’s one overarching lesson from the past few decades about how to break the cycles of poverty and unemployment, it’s the power of mentoring”and of intervening early, ideally in the high school age, that is the time a child’s career is being formed. Nagpur’s model of synergizing multi sectoral approaches can become a game changer. The process is slow, but once its gains momentum, it can work wonders.
The primary focus of most microfinance programmes the world over is that they are women centric. Perhaps we can take a cue from them. For empowering women, men have to be properly sensitised so that women are allowed both time and freedom and opportunity to chart out a path of social and economic independence. Treating women with the inherent dignity that they were created with, ensuring that they are given equitable opportunities to succeed is necessary to uphold the Qur’an’s vision, “O you who have attained to faith! Be ever steadfast in upholding justice,” (Q4:135).
(The writer is based in Nagpur and is an expert in microfinance. He has co-authored the popular book, The Essential Microfinance. He was associated with SBI for three decades as a grassroots field officer, program manager, policy maker and researcher in development finance. Moin Qazi can be reached at [email protected]).