Islamic Voice 0 September, 2016 12:00 am
Self- Management Before Study Management
Fifty Books as Mehr! – With a Rare Mehr, this Kerala Bride has Broken Stereotypes
Count Me Out; Let Me be the Women I want to Be! 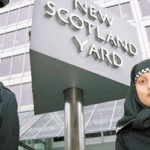 London: The hijab or the headscarf has been made an optional part of Police Scotland’s uniform in an attempt to attract more women Muslim recruits to the force, which currently has less black and Asian representation.
Previously officers could wear the religious headscarf with approval but it is now formally part of the police uniform. Police Scotland said it is working to make the force “representative of the communities we serve”. Chief Constable Phil Gormley said, “I am delighted to make this announcement and welcome the support from both the Muslim community, and the wider community, as well as police officers and staff.” “I hope that this addition to our uniform options will contribute to making our staff mix more diverse and adds to the life skills, experiences and personal qualities that our officers and staff bring to policing the communities of Scotland,” he said. A report earlier this year showed that just 2.6 per cent of applicants to join Police Scotland were from ethnic minorities. In order to reflect the 4 per cent figure across Scottish society, the force said it would need to recruit an additional 650 ethnic minority candidates. There are currently six Muslim women officers working for Police Scotland, but none of them wear the hijab either on duty or outside the force, BBC reported. The most recent figure for the overall strength of the force, released at the end of June was 17,242. Official figures showed that there were 127 applications from black, Asian and ethnic minority candidates in 2015-16. n