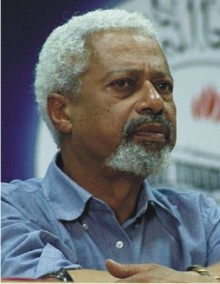 Announcing the award – the first to a non-European writer since Japan-born Kazuo Ishiguro in 2017 the Swedish Academy cited his “uncompromising and compassionate penetration of the effects of colonialism and the fate of the refugee in the gulf between cultures and continents.”

After his Ph.D. in 1982, he began his academic career by teaching at a Nigerian university and is currently a Professor and Director of Graduate Studies at the UK’s University of Kent. His focus is on post colonial writing and colonial discourse, focusing on Africa, the Caribbean, and India.

Beginning with “Memory of Departure” (1987), his ten novels include the Booker and Whitbread-nominated “Paradise” (1994), with the most recent being “Afterlives” (2020).

He also has a collection of short stories titled “My Mother Lived on a farm in Africa” (2006) to his credit.