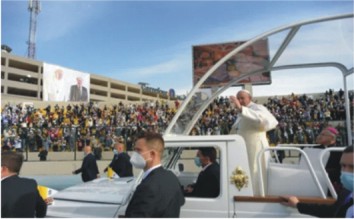 Pope Francis’ March visit with Grand Ayatollah Ali Al-Sistani, a prominent Shiite Muslim cleric, has already helped foster peace in Iraq. Still, religious and political leaders must continue to “invest” in dialogue if the meeting is to produce long-term positive effects, panelists said in a live-streamed discussion this week.

During a panel discussion on Christian-Muslim relations,recently  Cardinal Blase Cupich of Chicago, co-chair of the National Catholic-Muslim Dialogue, said religious leaders need to take the “risk of dialogue” in their communities spurred by the example of Pope Francis and the ayatollah.

Through its Office of the President, Georgetown University sponsored the event, Prince Alwaleed Bin Talal Center for Muslim-Christian Understanding, and Berkley Center for Religion, Peace, and World Affairs.

Pope Francis’ meeting with the ayatollah was one of the most talked-about moments of his historic March 2021 trip to Iraq. The two men spoke for almost an hour during a private meeting at al-Sistani’s residence in Najaf, central Iraq.

During the meeting, the grand ayatollah reportedly said that he believed that Christians should be able to live in peace — a statement that reverberated across the Muslim world. March 6th was then established as Iraq’s National Day of Tolerance and Coexistence, celebrated every year.

Fr. Toma said clergy have a responsibility to articulate “love, unity, respect.” In addition, he said that religious and political leaders must have a “vision” for peace and must be willing to take risks for that vision.

“I believe if we don’t make a real change, Christianity will not survive there. So the visit of Pope Francis to Iraq and meeting with Ayatollah Al-Sistani, I think that really sends a big message, not just to Christians but to Muslims as well, that we are close together.”

Imam Kashmiri reiterated that religious scholars and leaders have a role in advocating for a long-term plan to help Christians return. Christians wanting to return to their hometowns “have nothing,” he said, and they need support from the Iraqi government and the international community.

He noted that educating the next generation in the values of peace and tolerance is important for this “investment” in the Pope-ayatollah meeting.

“Enough is enough. We have to stop war wherever it may be…religious leaders have the power to bring some influence on political leaders, to bring the peace again to this world.”

Cardinal Louis Rafael Sako, the leader of the Chaldean Catholic Church in Iraq, said he had observed how the pope’s trip and his dialogue with Muslim leaders have already changed the atmosphere in Iraq.

“The pope touched the hearts of all Iraqis by his messages, especially Muslims. And now, something has changed in the streets, in the Mass, the population,” he commented.

“Christians are proud of that, and now they have very appreciated also,” he said.