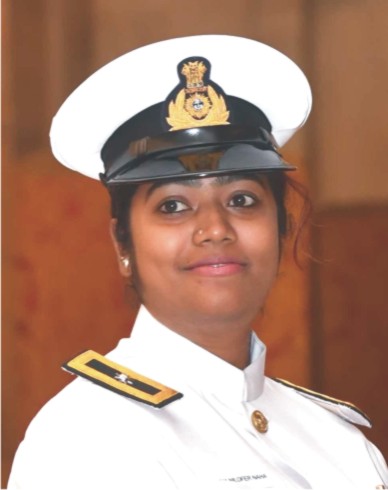 Islamic Voice 0 December, 2021 7:37 pm
Helpline, a Saudi platform: Bravery is talking about your feelings, not bottling them Up
The First Atlas printed in the Islamic World
Malaysia’s Mahathir Granted Lifetime Achievement Award

The strong waves of the sea could not stop her from riding the ship. Her grit and determination made her the first woman River Pilot in the world she is Reshma Nilofer Naha.
Coming from the humble background of Chennai, Reshma completed her school education and pursued a professional course in marine technology from the Academy of Maritime Education and Training (AMET), Chennai. After the completion of the course, she sailed across the world on both passenger ships and container ships. Finally, she was trained at the KopT (Kolkata Port Trust) for nearly six-and-a-half years and was posted as a full-time maritime pilot at the same port in 2018.
Dwelling on his role as a river pilot, Dwelling said, `The role of a marine pilot is to guide a vessel safely in and out of the harbor. The job requires tremendous physical and mental strength. It is never easy when you are the first one to achieve a feat.” Defeating people’s doubt, she worked hard and completed the tough training successfully. She added, `People don’t expect a woman to be the pilot. They thought I would leave the job in a few months, but I am here still doing my job.”
She admitted that her journey as a river pilot was not easy, especially when you are the first to achieve a feat. Talking about her job, she said, `We are the local expert navigators attached to one particular port. We know the ship as we know the palm of our hand, and we know the ins and outs of the port so that ships can enter and exit with ease,” she further explained that the captain of the ship could not be an expert in every port, which is why the job of a marine pilot becomes crucial.
Mentioning some of the challenges a river pilot has to face, she said, “The river is very narrow and has several sandbars and bends, and currents that could create problems. You need to be mentally alert and capable of taking swift action as every second is crucial while maneuvering a ship to avoid delays that could result in a disaster.”
Emphasizing the need for good physical fitness, she said,“ “We board a ship from a small pilot launcher or a pilot boat, and we climb up and down the ship using a vertical rope ladder, which requires some amount of fitness.”
Winning accolades from many, the recipient of Nari Shakti Puraskar continues to perform her duties with complete dedication. Staying away from family, roaring sea, and longer working hours have only made her stronger and gritty to do her job perfectly and inspire many others to join her league.