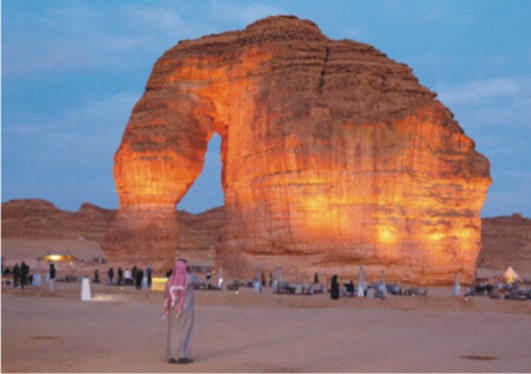 RIYADH: Saudi Arabia launched the world’s first “flying museum” highlighting archaeological finds on a plane journey between the capital and the ancient city of AlUla.
The museum, which is a collaborative project between the Royal Commission for AlUla and the national flag carrier Saudia, will exhibit a replica collection of artifacts that have been discovered in AlUla through archaeological excavations.
Passengers will also be able to watch a Discovery Channel documentary called “Architects of Ancient Arabia” that was released this year, the Saudi Press Agency reported.
Rebecca Foote, director of archaeology and cultural heritage research at the commission, will provide an introduction to the documentary during the trip and give an explanation about the artifacts featured in the museum.
She said: “There is a major load of work ongoing in AlUla by local and international archeologists, and yet we are just beginning to understand the complicated nature of AlUla’s past. AlUla is a hidden gem in the Arabian Peninsula, and we are slowly discovering its secrets. I am looking forward to sharing more information about our work with passengers of the Museum in the Sky trip, operated by Saudia.”​ (https://arab.news/zaz8f)