Security Affairs Minister Reprimands her for the outrageous stunt 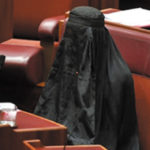 Pauline Hanson, Australian Member of Parliament for the Senate representing the far right One Nation Party, on August 17 enacted a stunt in the house. She came donning a burkha with face veil and sat in the House. The Queensland MP then wrenched herself out and said she just wanted to highlight the security risk involved by allowing wearing of burkha.
Pauline had been an MP between 1996 and 1998. She owns a retail chain selling fish and chips and had been in jail for some months in 2003 for electoral fraud. Since then she spent a few years in the United Kingdom too and was returned to the Parliament in the election last year. She is a known opponent of globalization, multiculturalism, Asian migrants and welfare schemes for the aboriginal people in Australia. She had also been known for such antics and theatrics and gathered a lot of critics.
In her speech, she pleaded for a ban on Burkha in Australia. But Attorney General George Brandis was not impressed. Responding to Pauline’s stunt, Brandis said: ” I am not going to pretend to ignore the stunt that you have tried to pull today. By arriving in the Chamber dressed in a burkha when we all know that you are not an adherent of the Islamic faith. I would caution and counsel you Senator Hanson, with respect to be very, very careful of the offence you do to the religious sensibilities of other Australians. We have about half a million Australians in this country of the Islamic faith. And the vast majority of them are law-abiding, good Australians.
“Senator Hanson! It is absolutely consistent with being a good, law-abiding Australian and being a strict adherent Muslim. For the last four years, I have had a responsibility pre-eminently among the ministers subject to the Prime Minister for national security policy. And I can tell you, Senator Hanson, that it has been the advice of each Director-General of Security with whom I have worked, and each Commissioner of the Australian Federal Police with whom I have worked, that it is vital for their intelligence and law enforcement work, that they work cooperatively with the Muslim community. To ridicule that community, to drive it into a corner, to mock its religious garments is an appalling thin to do and I would ask you to reflect on what you have done.”
Several members of the House stood up and applauded the response from Gen. Brandis loudly.
Pauline had been denouncing migrations, Islam, and had been calling for ban on construction of mosque and Halal certification.
(Script transcribed by a staff writer from Abc.net.au/news)