Islamic Voice 0 May, 2017 12:00 am
The Stark Problem of Family Violence – How Does Islam Resolve It?
Muslim Youth Invents the Flying Car
Al-Ameen

This crowd-sourced platform channelises donations for the disadvantaged 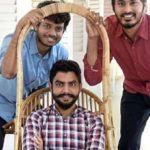 Chennai: It was the fag end of November 2015 and Chennai was beginning to reel under the onslaught of torrential rains. Though the floods were yet to hit the city, rooms in Amir Mahal, the 18th Century palace and residence of the current Prince of Arcot, had already begun to resemble a warehouse. Groceries packed in cartons covered every square inch of space as three youngsters worked round the clock, trying to coordinate sourcing and delivering of relief material. Within their first week of operations, they had groceries worth Rs 2.5 lakh and an alphabetic database of the city.
By the time the December floods came, they scaled up efforts and managed to get 25,000 packets of biryani from Paradise Hotel in Hyderabad via air and road, to help the countless who were marooned in the city.
With corporates such as Big Basket, Foodpanda and Snapdeal coming on board to pitch in, the trio “ Mohamed Asif, Fahd Khaleel Wallajah and Nareshwar Sivanesan”managed to mobilise large quantities of food, raincoats, mosquito repellents and groceries for those in need. Wallajah, the nephew of the current Prince, Nawab Mohammed Abdul Ali Azim Jah, along with close to 35 other volunteers and Amir Mahal staff mobilised relief efforts for the flood hit.
That was only the beginning for them. The events of December 2015 and their efforts to help fellow Chennaiites sparked the idea for a sustainable system to continue helping those in need.
And that is how GiveAway India “ a product crowdsourced platform that channelises donations to the needy “ began. “While GiveAway was set up in September 2015, the idea to formally create a single web or app system, where donors and beneficiaries come together, came about after the floods,” says Wallajah, co-founder of GiveAway India.
For three months since its inception, GiveAway focussed on sourcing spare food from restaurants and parties and distributing them among the homeless with the help of volunteers. But the floods gave impetus to what was a fledgling movement. “During the floods, we’d managed to convince corporates to donate and also come on board to encourage their users to donate to charity, since the prices of essentials sky-rocketed during the rains,” says Asif, adding that partners such as Big Basket and Snapdeal put out a message on their websites asking users to buy products from them that would go to charity. “When we decided to scale up operations and turn GiveAway India into a more sustainable venture, we spent six months researching what needs had to be addressed,” says Asif.
Recently, GiveAway India went live as a web and mobile-based platform. “The platform caters to homes and orphanages across the city and also has a pan-India presence. These homes and orphanages can enter requirements on our site, which are posted after verification. Beneficiaries can choose the cause they would like to donate to. Both the beneficiaries and donors are not charged anything by us,” says Asif. The causes supported by GiveAway India are many “ from football programmes for slum kids in Nagpur, woollens for the homeless in Karnataka and relief for drought-hit Maharashtra to elephant welfare programmes in Tamil Nadu. “We also support women’s issues, acid attack victims, people with blindness and deafness. Essentially, what beneficiaries do is donate to these causes by buying products on our site that are then sent to them,” explains Asif.
They also plan to introduce a feature that will allow users to choose an occasion (such as birthdays, anniversaries or memorial days) to donate to a particular charity. “For instance, many people would like to do something for the needy on such occasions. We can facilitate that through our website. If the donor wishes to be present on the occasion he/she can choose to do so as well,” says Wallajah.
As GiveAway India grows from strength to strength, the three co-founders have their future plans chalked out. “In the next three quarters, we want to get every home and orphanage in South India on our platform and then focus on strengthening our pan-India presence. We also plan to introduce geo-tagging to let you find an NGO or cause that is in your locality. And we’re on the lookout for investors who can not only fund us, but also mentor us,” says Asif.
(Extracted from www.thehindu.com)