Islamic Voice 0 September, 2016 12:00 am
Strive with Own Worldview
Skill-Based Education: Need of the Hour
Subconscious Mind and Beliefs: Learning and Understanding in Positive and Motivational Way…!! 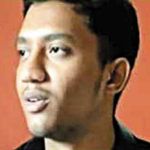