The Inspiring Life of Dr Mumtaz Naiyer – From Seemanchal to Southampton

Islamic Voice 0 January, 2018 12:00 am
Secularism – ‘An Issue for Us All, not Just Muslims’
Disturbing Pointers from Dhule
Muslim Youth Invents the Flying Car

Dr Mumtaz Naiyer was part of a team at the University of Southampton that made a significant discovery in efforts to develop a vaccine against Zika, dengue and Hepatitis C viruses. 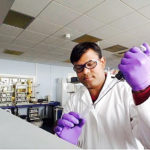 Mumtaz Naiyer is currently at the University of Southampton, pursuing his post-doctoral research, but the career of this leading scientist had extremely humble beginnings, so much so that had it not been for the sacrifice of his elder brother, Mumtaz may never have been able to attend school, let alone become a scientist. Naiyer  was part of a team at the University of Southampton that made a significant discovery in efforts to develop a vaccine against Zika, dengue and Hepatitis C viruses that affect millions of people around the world.
Talking about his days in Seemanchal region of Bihar where he grew up, Naiyer says, “My father passed away when I was 8 years old. It was extremely difficult for my mother to support us. As madrasas are cheaper, my mother even asked me to attend the Islamic seminary and become an aalim (Islamic scholar). After my father’s demise, one of my eldest brothers Zainul Abedin had to discontinue his studies to support the education of two younger brothers. As there were no schools nearby, I studied at home, and a single teacher used to teach all the children in the village. I was directly admitted to standard three in a government school, which was 4 kms. away from my village. There were no roads, and the situation in the rainy season was like a nightmare. There was strict discipline in our family for education. No matter how bad the day, one could not miss school.”
In fact, it would be fair to say that nothing that Naiyer achieved in his life came easily to him. Soon after he finished his schooling, he moved to Patna for his Class 12 and to prepare for medical entrances. “I wanted to become a doctor because I had seen young children die in my village due to lack of medical facilities,” says Naiyer.
Way Through Obstacles
But Naiyer’s journey from wanting to be a doctor to becoming a scientist is also a proof that talent, like a river, finds its way through obstacles. Even though he was unable to crack the medical examinations, he was selected for Bachelor of Dental Studies and B. Pharm at reputed institutes but could not take admission due to the high fees. So, he finally decided to do a simple, affordable but promising course: B.Sc. In the early 2000s, biotechnology was slowly finding its feet in India and luckily, the same year, Jamia had launched a B.Sc. (Biotechnology) programme. “The central university gave us an option to choose either of the programmes. In addition, those who were top in the merit list had an option to choose biotechnology, so I did it,” says Naiyer. Although he was now doing his graduation, money issues were still far from over for Naiyer. The money sent from home would not suffice for a city like Delhi, so he gave tuition classes to children residing in posh colonies around Jamia. Slowly, his talents were recognised and he started getting a merit scholarship from the Central Wakf Board, Ministry of Minority Affairs, Government of India for two years. That apart, his brothers also tried their best to support him throughout his academic journey.

Toughest Moments
After his Bachelor’s, he joined Jamia Hamdard for his Master’s, where again he shone through his academics and earned scholarships. However, just a month before his final exams, his mother passed away. Naiyer says this was the toughest moment in his life. “My family was going through an emotional and a financial crisis. Somehow, I managed to continue my studies,” he adds. Naiyer also appeared in national level exams like National Eligibility Test (NET) jointly conducted by CSIR-UGC. He was awarded NET-Lectureship and Junior Research Fellowship by the UGC to pursue a PhD. After his Master’s, Naiyer joined National Centre for Cell Science (NCCS), Pune, an autonomous institution of the Department of Biotechnology, Government of India, for his PhD. This is considered to be one of the top biotechnology research institutes in India. Here, Naiyer was able to work under one of the best Immunologists in the country Dr Bhaskar Saha, who is also a Shanti Swaroop Bhatnagar Awardee. “The financial support was provided by the UGC for five years in which I was awarded Junior Research Fellowship (JRF) for two years and senior research fellowship (SRF) for three years,” he says.
At the end of his PhD, Naiyer’s efforts and labour paid off and he received offers for postdoctoral fellowships from world-famous Universities like University of Montreal, Canada; John Hopkins University, Baltimore, Maryland, USA; National Institute of Health, Bethesda, USA; and Imperial College London, UK. He chose the University of Southampton in 2012 as his destination since it was more suited to his areas of research.

Future Plans
Naiyer, who is now on top of his work, says he wants to contribute more to science and use his knowledge and expertise against the serious threats to humankind posed by dangerous viruses such as Zika, Dengue, Ebola, etc. Talking about his future plans, Naiyer says, “I would like to establish my own lab and become a principal investigator. If given the opportunity, I would like to return to India and want to contribute to the Indian science.” Talking about Seemanchal, Naiyer says, “I along with some other friends from Bihar are trying to develop a unique platform where we can support meritorious students from Seemanchal irrespective of their financial conditions. I have a dream to establish school/colleges, hospitals and healthcare in every block of Seemanchal. I would also focus on girls/women education. I would share the roadmap at an appropriate time,” he says.
(Extracted from twocircles.net)