There was a time when sitar makers were paid handsomely and even commissioned by Mughal emperors down the ages to make their uniquely resonant instruments. These artisans, once the uncrowned kings of the music trade, are now struggling to survive. 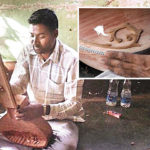 Miraj (Sangli District): Maharashtra: Around 40 km from the bustling city of sugar lords, Kolhapur, sits the small town of Miraj. We drive through crowded by-lanes, where you can relive age-old stories of a traditional craft that has its roots in this erstwhile royal city. The craftsmanship is something of a gharana in itself “ with successive generations of families engaged in creating beautiful stringed instruments, such as the sitar, tanpura and the swarmandal over centuries.

Fading melody: A sitar-maker of Miraj
Entering one of the workshops of the sitar-makers in a bylane, we meet the gifted Naeem, Imtiaz and Zuber, strangely all with the last names ‘Sitarmaker’, a proud heritage which binds the close-knit community that can trace its family tree to a single ancestor. Their pride, however, seems to be diminishing by the day. These artisans, once the uncrowned kings of the music trade, are now struggling to survive. They say, half in jest, “We are good at two things “ making sitars and living from hand to mouth”.
Lane of Luthiers
There was a time when these luthiers were paid handsomely and even commissioned by Mughal emperors down the ages to make their uniquely resonant instruments. Their flourishing trade had developed into an entire lane of luthiers, stretching from one part of the town to the other. It is called Sitargalli, meaning the lane where sitars are made.
Artisans at every shop we pass are trying to make a desperate pitch about their instruments. They even go to the extent of downplaying the quality of wares in the neighbouring shop. “Their art is not pure. They separated from the family for business and now want financial gratification from it,” they say. One such family member, Imtiaz, does not speak much. In his dingy shop, lie incomplete wooden frames of sitars. Some completed, but unsold sitars are visible under a dusty, mouldy cloth.

False Image of Prosperity
Imtiaz invites us to his home far away from the main town. On the border between Kolhapur and Miraj lies his house, an abode of legendary sitar-makers for over a century. Stretches of farmland in three directions behind his house lend it a false image of prosperity. Asked how much of the land he owns, Imtiaz politely replies, ” Hum toh rehte bhi border pe hai. Na ghar ke na ghaat ke .” (Even the house we live in is on the border between the two towns. We are neither here nor there).
The family greets us with piping hot cups of tea and biscuits. But the mood turns sombre when Imtiaz begins to speak, “Nowadays people want to play guitars and we don’t know how to make them. What they don’t realise is that the guitar is a foreign instrument. To make and buy foreign instruments in India is like sounding the death knell for our own instrument makers.”
Imtiaz recalls, “We used to live in a mansion. My father would tell me that his grandfather taught all of them how to make sitars. They would play together, eat together and live happily. But after a few years, when business slowed down, families were pitted against each other. Brothers competed to earn money; this killed the trade. Luthiers came to Miraj, learned the craft and left, started their businesses elsewhere. It is just here that they don’t want to keep the business within the family. This infighting only adds to the misery.”
His father, Abdul Majid, who has been making sitars for six generations, is hard at work finishing a sitar. He says, “Very few people want to put in the hard work and effort to learn the sitar. It is not easy. Your fingers bleed in the beginning. They get calloused. They hurt from the playing. It is not easy to sit with a straight spine for three hours, on the floor, for every riyaaz (practice) session. Very few have the determination to go on. If playing needs so much effort, can you imagine how much is needed to make the instrument?”

Power of the Art
Zuber, their cousin, speaks of how he almost drove a chisel into his foot while hollowing a plank for a sitar. Gazing at the children of the family, Imtiaz wonders, “I don’t know whether these children will ever understand the power of the art that they hold in their hands. They will be the eighth generation in this lineage, should they choose to stay with the trade.”
The family has started farming because it cannot afford to wait for sitar orders. “For sustenance, we have leased some land and are growing vegetables.
As we’re leaving, Imtiaz gives us one final sales pitch that is too hard to ignore. “We will make the best instruments you need and, if you don’t like them, I will personally carry them back to my workshop. My trade is not agriculture, it is these instruments.”
(thehindubusinessline.com)