A Skewed Analysis of Islamophobia

This book purports to explore the roots and manifestations of Islamophobia-prejudicial views about Islam and negative stereotypical images of Muslims that are now fairly widespread across the world. 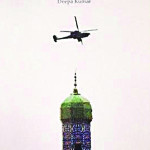