Islamic Voice 0 August, 2015 12:00 am
A Brilliant Narration of Combating Terrorism at the Ideological Level
Seeking a Paradigm Shift
Need for Reforms and Changes 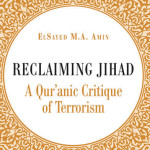