Islamic Voice 0 July, 2015 12:00 am
An Impassioned Plea for Interfaith Dialogue
Rich Harmony between Scientific and Spiritual Worldviews
Talaash: A Search for the True Meaning of Life 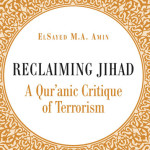