A Handy Compendium on Urdu Media

Islamic Voice 0 March, 2015 12:00 am
India 2047- Empowering The People
A Common Basis for Dialogue
Religion and Science in Harmony 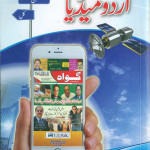 Syed Fazil Hussain Parvez’s book Urdu Media, Kal, Aaj, Kal could be called a compendium of Urdu journalism and media institution. The author has collected information on a breathtaking range of topics and subjects that could be conceived for a book in this genre.
Urdu is one among the principal national languages of India. Though it is spoken over a wide swath of regions across the country, it has little to claim by way of a territory of its own. This puts it in a disadvantageous position in an India where states represent linguistic and cultural units. But its spatial spread lends it a pan-Indian character which only English can claim among the other languages used in India.
Wide Real, Fewer Numbers
Urdu newspapers are published from Srinagar to right up to Chennai in South. But none of them can be compared to English dailies or leading vernacular dailies in terms of number as well as quality. This territorial spread of Urdu therefore lends Urdu both advantages and disadvantages. This has led to wide variety of journals from umpteen centres within the country. But it also places limitations on circulation and advertisement.
New Media
Given these circumstances, it is no surprise that Urdu has given rise to newspapers and journals catering to all tastes, sections of people and genres. Parvez has painstakingly gathered info about all the journals and newspaper, past and present. He has also looked at the new media (i.e., internet, email, blogs, facebook, twitter, and What’s App) that have limitlessly extended reach of Urdu”as of other Indian languages”to audiences in the Gulf and the West among the Indo-Pak diaspora. No journal worth its salt seems to have skipped a mention by him. Readers are deluged by the avalanche of information the author had been able to dredge from the public memory as well as archive.
He has also gone into the new audio-visual hardware that has phenomenally contributed to networking of the humanity. Media related laws too have been analysed. Urdu programmes on multinational TV and radio networks have also been profiled. Latest advancements in the field of Urdu composing/calligraphy have also been featured. Journalism and Mass Communication courses have also been introduced.
Tightrope Walk
Sustainability and credibility are two essential prerequisites for the media or newspapers. They require a fine balance and tightrope walk for the owners and editors. Urdu journalism has had a precarious existence during the last three decades. Often the question of sustainability has led to compromise on credibility. And those who were successful in attaining some modicum of credibility, have fared poorly in matters of sustainability.
A fair assessment would reveal that Urdu journalism is past its prime. Newspapers are either owned by politicians or those who aspire to be one among them. No wonder then why Urdu newspaper tend to behave like mouthpieces of political parties soon after they have gained some credibility. There is no Urdu media group across the country that does not boast of a Rajya Sabha membership, in the past or present. This of course, happens at the top. At the level of the lowly scribe on the street, it is ‘lifafa journalism’ culture that is all-pervasive. It breeds sycophancy which proves to be the nemesis of independent journalism.

Rampant Plagiarism
Halcyon days of Urdu journalism are clearly over. Most newspapers revolve round personalities or institutions. Public interest does not seem to be the criterion for judging news reports and commentaries. However, up to 1980s there were good literary journals such as Biswin Sadi, Shama, Gagan, Shabkhoon, Khilauna, Tajalli etc that catered to high taste. Sorrowfully, they are all dead and gone or are languishing in wilderness. Urdu media does not seem to be interested in spending on knowledge creation. Originality is rare to be found in views and reviews. It shirks spending on original news-gathering, scoop generation, conducting research, survey and investigation, even if it is affordable. Journalists are often used as PROs to curry favour with powers that be or the administration for owners. It survives upon cut-and-paste, plagiarisation, and handouts. Let alone fields of science, technology, agriculture, IT, business and trade, even religious magazines are shorn of originality. If you have read one of them, you have read them all, almost. The list of madrassa journals in Parvez’s work therefore appears out of place and complete redundant. Muslims may crib about absence of effective media such as a national English daily with them, but they fail to analyse why a potent language like Urdu is yet to have an effective, all representative newspaper.

Some Home Truths
The author has devoted last two chapters to critiquing the state of Urdu journalism, especially in India and some home truths have been frankly spilled. In pursuit of sustainability of small media ventures, Urdu journalism has made so huge compromise with the credibility that it has almost lost the most vital section of its readership to other languages.
The author has taken care to provide footnotes and references wherever necessary, something not expected of a book in Urdu. Profusion of English terms has also led him to very thoughtfully add a glossary of Urdu meanings of terminology, acronyms and abbreviations. The book is a helpful guide in learning about the health of the Urdu journalism in the new century. The author deserves all the encomiums.