A Little Book with Loads of Wisdom!

This book is slim and light, and makes a wonderful gift to be given to friends! Sharul Hussain and Kube Publishing deserve a very hearty ‘Thank You’ for bringing out this book, which has been published under the “The Treasury Series in Islamic Thought and Civilisation”. 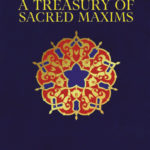 This inspiring collection of sacred maxims is drawn from the genre known in Arabic as al-qawaid al-fiqhiyyah. These maxims are pithy sayings that Muslims can use as a guide for Islamic practice in a wide range of areas, from rituals of worship to financial transactions. Technically translated as “legal maxims”, the range of topics covered encompasses core ethical principles at the heart of the Shariah.

Each maxim explained in this book is rich in meaning, and author Shahrul Hussain’s commentary provides readers an idea of their significance and relevance. The book will help deepen the understanding of key aspects of Shariah in its legal and ethical dimensions.

Shahrul Husain is well qualified for the task he has assumed. He is a lecturer in Islamic Studies at the Markfield Institute of Higher Education (UK). He studied Arabic and Islamic Studies in the UK, before pursuing further study at the Azhar University, where he graduated from the Faculty of Islamic Law and Jurisprudence in 2001. In 2010, he completed his Ph.D at the University of Aberdeen on the subject of Islamic law in Muslim minority contexts.

Juristic maxims enjoy a special and privileged place in Islamic jurisprudence. They are a discipline that combines a theoretical-cum-philosophical thought, translated into juristic dictums and encompassing a multitude of jurisprudential rulings. Shahrul Hussain explains that the legal justification (hujjiyah) of all juristic maxims comes from the Quran and Sunnah in one way or the other. To understand this better, he has divided juristic maxims into two types: the first are those that are directly Quranic, and are known as the five core maxims. For example: the maxim “Acts are judged by their goals and purposes” is based on the Prophetic tradition:” Indeed all actions depend upon intention, and for every person is that which he intends.” (Bukhari).

The second type are also based on the Quran and Sunnah, but are subject to scholastic disagreement.

The moral message of the five core maxims explained by Shahrul Hussain is very useful.

1. Acts are judged by their goals and purposes: The moral message this maxim aims to teach is sincerity. Sincerity is the foundation of all acts of worship, and worship is the principle purpose of human creation. Before anything, the primary goal of any Muslim should be to get his or her intention right.

2. Harm to be removed: The moral message this maxim aims to teach is outlining the principle code of conduct by which every Muslim should live her or his life, not to cause harm to others and she or he shall not be harmed.
3. Customary usage is the determining factor: The moral message this maxim aims to teach is one of tolerance and respect. No two people are the same, and so there are bound to be different habits, practices and cultures. This shows the greatness of God’s power”how from one man and one woman, humankind populated the earth. It celebrates a multitude of diverse cultures. Sharing a common ancestry means sharing and having a common love for all humanity.
4. Certainty is not overruled by doubt: The moral message this maxim aims to teach is that Muslims should have a good opinion about everything. By doing this, it will create a positive mindset in people to deal with the daily challenges of life.

5. Hardship begets ease: The moral message this maxim aims to teach is that whenever dealing with others, one should do so with gentleness and ease, showing compassion and being thoughtful to the difficulties that others may be facing.

This book is slim and light, and makes a wonderful gift to be given to friends! Sharul Hussain and Kube Publishing deserve a very hearty ‘Thank You’ for bringing out this book, which has been published under the “The Treasury Series in Islamic Thought and Civilisation”.