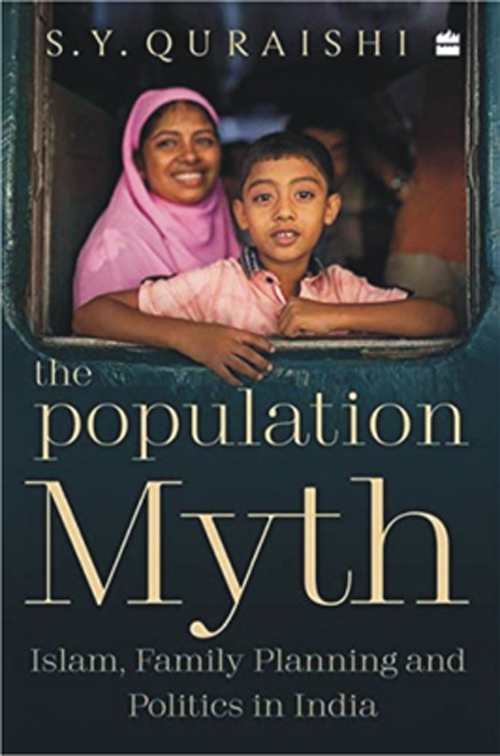 The Population Myth: Islam, Family Planning and Politics in India

Reviewed by Syed Tahsin Ahmed 0 June, 2021 4:38 pm
A More Meaningful Understanding of Shariah
Dissecting the Terror and Trial
Clearing the Mist on Intercession

Author: S.Y.Quraishi
Publisher: Harper Collins Publishers India
Year of publication: 2021
Price: Rs. 499
There has been a vicious propaganda over the years that Muslims will outnumber Hindusby 2035 or so and become the majority in India. One more narrative is that Muslims are responsible for the population explosion in India. The book “The Population Myth” by S.Y.Quraishi, former Chief Election Commissioner of India, debunks this myth with facts and data from unimpeachable sources.
There is no denying the fact that the percentage population of the Muslims has gone up from 9.8% in the Census year 1951 to 14.2% in the Census year 2011 in contrast to the percentage population of the Hindus, which has gone down from 84.1% to 79.8% in the same period. (No census was done for Jammu and Kashmir in the year 1951). Yet, there is also a different perspective to this issue. The author accesses Census of India figures which reveal that the differential percentage of increase in Muslim population over the Hindu population which was 10.2% in 1961 has come down to 6.2% in 2011.
Population Growth
According to the Census 2011, the population growth of various religious groups has come down in the last decade (2001-2011). In this period, the Hindu population growth rate slowed from 19.92 per cent (1991-2001) to 18.5 per cent (2001-2011). But what is significant is that the decline of Muslim population growth rate has been even sharper, from 29.52% to 24.6%. The Muslim population growth rate in the decade 2001-2011 fell by almost 5 percentage points in comparison to the corresponding 1.5 percentage point’s fall in the Hindu population. The decadal growth data of the last decade indicates that Muslim population growth has started on a trajectory of gradual decline.
Total Fertility Rates
The author further refers to the fertility data by religion to demolish the myth of increasing ‘Muslim rate of growth”. According to the National Family Health Survey, the decline in Total Fertility Rates of Muslims during the ten years from 2005-06 to 2015-16 was 23 per cent as compared to the Hindus, for whom the Total Fertility Rate decline was 18 per cent. With more statistical data, the author reinforces his argument that the Muslim population will never exceed the Hindu population. Moreover, the population gap between the two communities is so large that Muslims are not surpassing Hindus even after the faster population growth rate.
India’s Family Planning Programmes and Five-Year Plans
The book is not just about dispelling the fears about Muslim population overtaking the Hindus. It traces the history of India’s family planning programmes right from the year 1952 when it was launched. Infact, India became the first country in the world to launch such a plan nationally. The author traces the importance given to family planning and birth control in the five-year plans, underlining their successes and drawbacks too.
Islam and Family Planning
The author dwells at length on the question of whether Islam allows Muslims to practice birth control. He quotes a verse from the Qur’an and two ahadith which he considers as a ‘complete prescription for family planning’ and clinching evidence. The verse from the Qur’an as quoted is: “Let those who find not the wherewithal for marriage keep themselves chaste, until Allah gives them means out of His grace” (Surah an Nur-The Light 24:33). The first hadith quoted is from Al-Bukhari in which the Prophet (pbuh.) says: ‘O young men! Those of you who can support a wife and household should marry. For, marriage keeps you from looking with lust at women and prevents you from promiscuity. But those who cannot, should take to fasting, which is a means of tampering sexual desires.’The second hadith, quoted from Abu Dawood, Ibn Hanbal and al-Tahawi, is claimed to even suggest a method to prevent conception.
The author goes on to quote the opinion of renowned ulema and concludes that Islam is fully supportive of temporary methods for family planning. However, sterilization or other irreversible methods are disallowed by almost all sections of the ulema. It is creditable that the author has dwelled deep into the aspect of permissibility of birth control methods from an Islamic point of view instead of merely accepting at face value the argument that Islam is against all such measures.
The author succeeds in dispelling the notion that Muslims’ relatively higher fertility levels have their roots in Islamic theology. The author goes on to say that 45% of Muslims in India have adopted family planning. So, making population growth in India a communal issue is uncalled for.
Family Planning Across
Major Religions
By devoting a chapter on the attitude towards family planning among other religions like Christianity, Buddhism, Judaism, Confucianism, Taoism, Hinduism, Sikhism and Jainism, the author tries to widen the focus of the book from Muslims’ attitude towards family planning to a much broader canvas.
Conclusion
The author could have made the book a bit more concise by avoiding repetitive statements. Nevertheless, the book is a systematic and brilliant exposition of the vexatious issue of Muslim population growth in India which is often used to stoke majoritarian fears and anxiety regarding a supposed demographic skew.
A must-read book!