An Islamic Vision of Non-Violence

In this very timely book, Jeffry Halverson persuasively argues for the validity of a different narrative of Islam, one based in and committed to nonviolence. 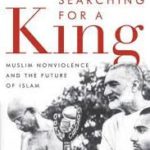 Searching for a King”Muslim Nonviolence and the Future of Islam

The notion of Muslims and Islam being somehow linked to violence is widespread today in many circles. In this very timely book, Jeffry Halverson (Islamic Studies scholar and historian of religions, presently teaching at Arizona State University, USA) persuasively argues for the validity of a different narrative of Islam, one based in and committed to nonviolence. Recent icons of nonviolent activism, such as Martin Luther King Jr. (which explains  the word ‘King’ in the book’s title) and Mahatma Gandhi, do have parallels among Muslims, too, Halverson informs us, even though they are not as widely known, among both Muslims and others, as they should be.

A “Simplistic Farce”
Halverson notes the lamentably widespread belief in what he terms ‘the narrative of violence’ as a means for seeking to address grievances. This is definitely not a Muslim-specific phenomenon, he points out, at the same time as he notes that it is something that those Muslims who support extremism in the name of Islam do share. He stresses that as a means to resolve grievances and create socioeconomic change, this narrative of violence is a “simplistic farce”. “It is a form of false consciousness. The perpetrators of violence are actually enacting the source of their own discontent as an erroneous means to alleviate it.” Halverson refers to the terrible destruction that Muslim societies themselves have faced as a result of violence in the name of Islam to show how utterly counterproductive the narrative of violence is. He insists that “the violence of the extremist is pointless, doomed to failure, and abhorrently wasteful. It is only through rejecting the false promise of the narrative of violence that progress, prosperity, and prestige can be attained.”

Diametrically Opposite Conclusions
Halverson notes that recent events have created the impression that Islam is “somehow uniquely and irreconcilably violent”, but, he says, “I find that impression troubling and misguided.” All religions, he explains, are humanly interpreted by interpreters according to their own subjective and contextual needs and interests. There is no single interpretation of a religious text, each being interpreted diversely. There will always be rival readings to support rival conclusions
When it comes to nonviolence, Halverson explains, virtually all religions face issues that have to be reconciled. “Violence is found in the sacred texts of nearly all religions; it simply depends on where one looks”, Halverson says, adding that certain references to violence in Islamic texts is not at all unique. This reference to violence in the different scriptures is diversely interpreted”by advocates of extremism and by champions of nonviolent activism”to come to diametrically opposite conclusions.
Halverson explains some of the diverse ways in which the concept of jihad is understood in Muslim sources, including by advocates of Islamic nonviolence. There are many possibilities of interpreting jihad to mean nonviolent efforts for a noble cause, he tells us. These understandings need to be made more widely known in order to counter radical discourses on jihad, Halverson believes.
Rejecting the narrative of violence, Halverson presents a counter-narrative to it”the narrative of nonviolence. By ‘nonviolence’ he means nonviolence action (as distinct from passive nonresistance) as lived out by Mahatma Gandhi and Martin Luther King Jr. He sees it as the appropriate method for addressing a range of sociopolitical issues. In this regard, he says: “Readers might even express skepticism that Islamic nonviolence is possible, given the outrageous violence that afflicts the contemporary Muslim world. Rest assured, however, that Islamic nonviolence is very much a reality and that its champions are numerous.”
Halverson highlights the fact that this narrative of nonviolence is available to Muslims within their own religious traditions and heritage. He presents his case for the compatibility of Islam and nonviolence by recounting the teachings of five modern Muslim champions of nonviolence from different parts of the world.  All of them saw nonviolence as “as something that is fully compatible with the Qur’an and the teachings of the Prophet Muhammad”, Halverson explains. “By examining these figures and their interpretations of Islam”, he writes, “it is my hope that non-Muslim readers will better appreciate the rich diversity and peaceful aspects of Islam, and that its Muslim readers will better appreciate the important heritage that their brothers and sisters in Islam have left them for the future.”

Abdul Ghaffar Khan
One of the most remarkable advocates of nonviolence as a means for socio-political transformation was Abdul Ghaffar Khan (b. 1890-1987), the Pathan leader who was a close colleague of Mahatma Gandhi. Halverson provides interesting glimpses into the life and worldview of the ‘Frontier Gandhi’, who, while rooted in Islamic traditions, enthusiastically embraced people of other faiths and believed that non-violent means were the only appropriate way to solve complex socio-political issues.
Shaykh Jawdat Saeed
The second advocate of Islamic nonviolence Halverson profiles is Shaykh Jawdat Saeed. Born in Syria in 1931, Saeed studied at Al-Azhar in Cairo, a leading centre for Sunni Islamic learning. A prolific writer, he has extensively critiqued, on Islamic grounds, the politics-centric interpretations of Islam (also called ‘Islamism’), and has also written on nonviolence from an Islamic perspective. Saeed asserts, Halverson tells us, that the manipulation of the concept of jihad “has probably caused more harm to Muslims than any other malpractice” and so, he says, those who use jihad as a violent tool for coercion and shedding blood “must be quelled with any possible means”, not only because they are terrorists, but because “they are also trying to distort and corrupt Islam”.

Mahmoud Taha
The late Sudanese scholar, Mahmoud Taha (executed in 1985) is Halverson’s third champion of Islamic nonviolence. Halverson provides a broad overview of Taha’s approach to Islam, which believed that peace and nonviolence were the Islamic norm.

Muhammad ibn Mahdi Hussaini al-Shirazi
Halverson’s fourth case study is Muhammad ibn Mahdi Hussaini al-Shirazi (1928-2001). Born in Najaf, Iraq, in a family of Shia religious scholars, Al-Shirazi was a prolific writer. He stressed teachings of nonviolence and forgiveness in the Quran and the traditions from the Prophet and the Imams. Al-Shirazi argued that the “just as the soul is stronger than the body, so too is nonviolence, since it is the weapon of the soul, and so it is more powerful than the weapon of the body, which is made of matter.” He highlighted cases of early Muslims who personified nonviolent resistance to oppression. He asserted that nonviolence is more than simply nonaggression. It means, he explained, that “an individual would not attempt to hurt another individual even with respect to the strongest of his adversaries and even if he had the right to do so; [for] Allah the Almighty states [in the Qur’an]: ‘And if you forgive, it is closest to righteousness.'”
Halverson tells us that besides what Al-Shirazi termed “physical nonviolence” he also advocated “verbal nonviolence” and “nonviolence of the heart” (the latter being described in traditional Islamic discourses as jihad al-nafs or ‘jihad of the self (or soul)’. Al-Shirazi noted that these forms of nonviolence are more difficult to practice than “physical nonviolence,” but must be practised nonetheless. “Verbal nonviolence” is to curb ones tongue so as to not damage the aggressor”in other words, curbing hostile and aggressive speech. Believers faced with insults, he advised, should “seek refuge in silence and abstain from responding likewise”. “Nonviolence of the heart” is when “one does not fill his heart with violence towards foes and adversaries”.

Maulana Wahiduddin Khan
The New Delhi-based Maulana Wahiduddin Khan (b. 1925) is Halverson’s fifth champion of Islamic nonviolence. Halverson provides some insights into the Islamic theology of peace that the Maulana has developed, including his critique of the politics-centred interpretation of Islam and of terrorism in the name of jihad.
Halverson hopes that his book will help foster greater discussion and awareness among Muslims and others about nonviolence and about great Muslim champions of it who, he says, rightly belong alongside others who are more commonly known. That may go a long way in countering violence in Muslim societies and in the world more generally, while leading both Muslims and others to appreciate the rich possibilities that exist in Islamic tradition of nonviolence as a means for the resolution of grievances and negotiating social life. Readers committed to that vision may find this book a great blessing. n