Islamic Voice 0 November, 2017 12:00 am
Understanding Synergy Between Religion and Science
Prophet’s Life – Provides Valuable Lessons for People for All Times.
India’s Voice at the United Nations – Speeches by E. Ahamed 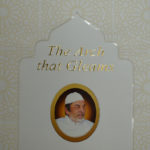 This coffee-table book documents the transition of an institution from traditional to modern. The Arch That Gleams packs between its covers the saga of the Khwaja Education Society, founded by the custodians of the dargah of Khwaja Banda Nawaz, one of the most well-known Sufi saints of the Deccan.
Gulbarga (now Kalaburgi) was the seat of Khwaja Banda Nawaz Gesudaraz, a saint of the Chishti Sufi order who migrated from the North and became a source of enlightenment in the region in the South where he settled down in the 14th century. The descendants of the saint kept the lamp of spirituality burning over the centuries.
The Partition of the country came as a brutal shock to the community steeped in orthodoxy and conservatism. The big shake-up woke up the ones who had their fingers on the pulse of the time. The sajjada nashin or custodian of the dargah, Syed Muhammad Al-Hussaini, perceived the rumblings of change. He was sure in his mind that the convulsions that were being experienced would not be short-lived and were heralding a new age and that one could ignore the knock of the times only at one’s own peril. In 1958, he set up the Khwaja Education Society, and a school was started to equip the younger generations with the knowledge and skills of the new age.
Sixty years later, the dargah and its environs stand metamorphosed into a hub of education. Burqa-clad and mostly veiled girls can be seen heading to colleges clutching bags and laptops. Busy medical interns briskly strut about the campus with stethoscopes dangling from their shoulders. Boys can be seen strutting on horses in the Riding Club in Sangtrashwadi, an erstwhile desolate locale turned swanky in recent years.
Muhammad al-Hussaini departed from this mortal world in 2007. He had groomed an able successor in his elder son, Syed Shah Khusro Hussaini. The movement and the institutions were not only in safe hands but were being passed over to a dynamo suffused with subliminal energy. Khusro had returned in 1982 after a decade of studies at McGill University in Canada. Appointed the naib muttawalli (deputy custodian), he was ready to carry the mantle forward.
Change is universally agreed to be the only constant in the world. But moulding an institution as old as the seat of a renowned saint into preparedness to accept change and modernity was no mean feat. It called for summoning a great deal of perseverance and tenacity, and Khusro was not found wanting. Slow but steadily, the father-son duo had nourished a pining for change among those associated with the dargah. Institutions popped up with regularity”an engineering college (1980), a general hospital (1988), a school of Nursing (1992), a medical College (2000), a PG college of mass communications (2009), and, finally, the crowning piece, the Sayyid Akbar Husayni College of Law earlier this year.
This mission was not merely pioneering but also unique, for no dargah in the country had ever attempted channelizing the offerings it received so productively i.e., investing in education and skilling of the younger generation. The degree of altruism seen here is perhaps nowhere else to be seen at any other such shrine.
In this book, Nishat Arif Hussaini, Principal of the Bibi Raza Post Graduate Department of English, strives to focus on the precision and meticulousness with which this institution-building was undertaken under the stewardship of Mohammad al-Hussaini, and, still later, Khusro Hussaini. They had the eye for detail even as the work went apace. The dargah brought in computers and went out of the way to ensure comfort and convenience to the zaireen (devotees). Concern for the environment found due recognition, just as heritage was handled with respect and care. Values that inform and inspire great institutions pervaded all aspects of the growth and development. No wonder why the Khwaja Education Society should not graduate up to a university in years ahead.
The book captures the trajectory of growth of the institutions around the dargah with great care, providing insights from the lives of the reservoirs of spirituality who are venerated by millions, regardless of religious affiliation. Multi-colour photographs and images amply intersperse the text.
The author deserves kudos for the monumental effort that has gone into putting to shape a volume that is likely to adorn bookshelves for long.