Islamic Voice 0 October, 2019 12:00 am
A Mystical Dimension for the Modern Secular World
Rise of A Barefoot Boy
Repositories of Classical Learning

A new book uses evidence from five areas of scientific exploration to make a case for the existence of God and the creation of the universe and life.

According to its publisher, “Not since the release of Charles Darwin’s ‘Origin of Species’ in 1859 has a book been published that has such high potential to change Western culture’s worldview and to reinstate God as an unquestioned fact.” Just released by The Oaklea Press Inc., “How Science Views God: What Everything Thinking Person Must Know,” draws upon the following to make the case for the existence of God and of intelligent design of both the universe and life:”1.) Evidence showing that the material universe had a beginning; 2.) Evidence showing that, from its beginning, the universe was been finely tuned to allow for the possibility of life; 3.) Evidence from biology showing that after the universe came into being, large amounts of genetic information similar to computer code came about in DNA that made, and continue to make, life possible; 4.) Evidence from research conducted at the University of Virginia School of Medicine showing that the brain does not create consciousness, but rather, that the brain can be compared to a cell phone or a radio that receives consciousness that originates somewhere else, and then integrates it with the body; 5.) Evidence from quantum mechanics and a number of other sources that consciousness or mind the medium of thought is nonlocal and appears to be present everywhere.
Drawing upon more than three dozen credible sources, Stephen Hawley Martin, the author, lays out evidence that textbooks produced and distributed over the past hundred or so years are woefully incorrect that propagate Scientific Materialist dogma stating that: 1.) Nothing in the universe exists except material substance; 2.) The universe and life came about by chance; 3.) Evolution came about solely through random mutations and the mechanism of “survival of the fittest” or “natural selection;” 4.) Consciousness and intelligence did not exist until evolution produced a brain.
Martin draws two conclusions he maintains are clearly supported by the evidence. They are that God or “Infinite Mind” not only was the “First Cause” but also continues to be involved in our universe today. He then speculates about the nature of God and the meaning and purpose of life.
“How Science Views God: What Everything Thinking Person Must Know” is published by The Oaklea Press Inc. in trade paperback, ISBN 10: 1687528594, for $11.95 and Kindle, ASIN: B07X7FHG1H
(Contact: Steve Martin: [email protected]) 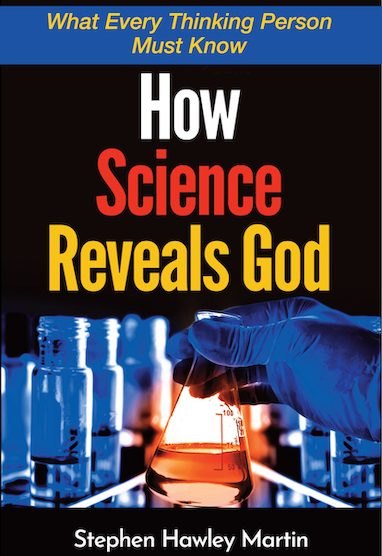