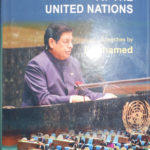 By Bookwell Delhi, Rs. 699
Late E. Ahamed who passed away last year, was a prominent politician from Kerala. He was elected to the Kerala Assembly five times and was elected a Member of Parliament six times (1991, 1996, 1998, 1999, 2004 and 2009) on the ticket of the Indian Union Muslim League. He was twice taken into the Union Cabinet as Minister of State for External Affairs during the UPA-1 and UPA-II Government when the League was part of the ruling coalition at the Centre. He represented India at the UN 27 times. The volume compiles his speeches delivered at the United Nations on subjects as varied as Palestinian people, Decolonization, Human Rights, Apartheid, and Oceans and the Laws of the Sea. Foreword has been penned by Mr. Shyam Saran, a renowned diplomat from India.