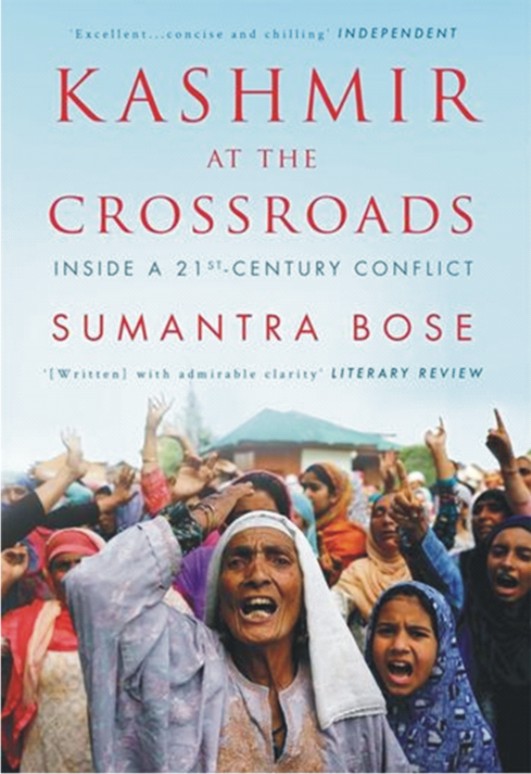 Kashmir at the Crossroads

In the long list of bibliography on Kashmir, the fresh addition is the book ‘Kashmir at the Crossroads’ by Sumantra Bose. The book’s unique selling point is its chapter ‘The Hindu Nationalist Offensive’ that dwells on the developments from 2019 onwards.

Sumantra Bose is no stranger to the world of academics. Apart from being the grandson of Netaji Subhas Chandra Bose, he is a Professor of international and comparative politics at the London School of Economics. He specializes in the study of ethnic and national conflicts and their management, with a particular focus on the Indian subcontinent (especially Kashmir) and the former Yugoslavia (in particular Bosnia and Herzegovina).

The author writes; New Delhi’s policy towards Kashmir resulted in a dysfunctional polity bordering on dystopia, ruled by a host of Draconian laws that hollowed out Article 370, and little that was left in an empty shell was taken out by Prime Minister Narendra Modi led government in 2019.

The unique contribution of this book is the study of the recent past, particularly the developments surrounding it since 5th August 2019. The fine print of the book is the burial of the skeleton of Article 370 is consequential as the author is of the view that the recent developments have inaugurated a new phase in the history of the Kashmir dispute.

The author minces no words that the decision of the BJP was a politically motivated move to consolidate its Hindu constituency in the Indian hinterland. He argues that depriving JK of its special status wasn’t motivated by a desire for equity in the Indian Union; rather it was an attempt to subdue the autonomy of a majority Muslim state, which was incongruous with their belief in a Hindu nation.

He writes; “Modi and Shah anticipated that the Pakistani reaction to the ‘iron-fisted Kashmir policy’ would make it hysterical and that this reaction would help the BJP to sell their brand of nationalism to the majority Indian public.”

The BJP got it right in its first assumption but “the strongman duo did not anticipate the nature and severity of China’s response and their master stroke on Kashmir brought China to India’s doorsteps.

On 6 August 2019, a day after the move separating Ladakh from J&K, the Chinese foreign ministry issued a statement criticizing the action for unilaterally changing the status quo and exacerbating tensions.

The Chinese statement said, “India has continued to undermine China’s territorial sovereignty by unilaterally changing its domestic law (on J&K) which is unacceptable.”

Bose writes that this was not a mere statement as China moved from lurking in the background to looming in the foreground in 2020 and now the Kashmir conflict has become trilateral India-Pakistan-China.

Bose further writes “at the beginning of the third decade of the twenty-first century, the Hindu nationalist attempt to radically reset the Kashmir question has resulted in the regional geopolitics of the conflict becoming explicitly trilateral India-Pakistan-China. He adds, “The Hindu Nationalist Offensive’ on Kashmir has made the current situation “highly flammable.”

The book is divided into five sections; three sections focus on historical background: 1947-89, 1990-2004, and 2005-2019. The two sections are on the present-day, one on the actions of the ruling BJP government and one on the international dimensions of the crisis.

The section ‘The Dispute’ is an overview of the conflict from 1947 to 1989. ‘The Carnage’ chronicles the years of insurgency from 1990-to 2004 and the brutal state repression.

Bose writes the carnage that engulfed Jammu and Kashmir from 1990 is “a grim lesson in the ruinous potential… of nationalisms competing for supremacy.”

The section ‘The Stone Pelters’ dwells on years from 2005-19. And section ‘The Hindu Nationalist Offensive’ deals from 2019 onwards, where the author opinions that the Kashmir conflict has entered a new phase.

The final chapter, “the 21st Century Conflict,”‘ details the current geopolitical status of the crisis. There is a summary of China’s role in the conflict, which starts with explaining the Aksai Chin dispute and the bloody 2019 Galway encounter.

Then there is an analysis of the US’s role, including Trump’s courting of Modi, and some predictions are made for the Biden administration. Here Bose highlights the major drivers and factors that will shape the conflict over the next few years and makes insightful predictions that allow us to see how almost seven decades on, this conflict is just as crucial for the future of the region as ever.
‘Kashmir at the Crossroads’ is a solid, unafraid scholarship peppered with personal reminiscences from the author’s decades of engagement with the area and the subject. Every major political event of the last seven decades is discussed and analyzed in detail in this book.

He writes that if such a major crisis does explode, all is not lost as “such a conflagration might pave the way to finally laying the conflict to rest through diplomacy and statecraft.”

This relatively neutral stance by the author makes the book readable because this is one subject where truths are hidden under the heaps of lies.

The Author is a journalist based in Chennai