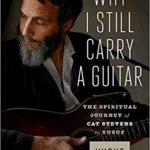 Why I Still Carry A Guitar is Yusuf Islam’s gripping and moving memoir. The book reflects his return to music, to deliver his message of peace to the world.

God has gifted each one of us talents which we can use to do good for ourselves and to humanity at large.  Having a musical aptitude is God’s gift too”a gift that Yusuf Islam has been blessed with.
Born in London on July 21, 1948, when  Steven Georgiou was 18 years old he became ‘Cat Stevens’. He was rich, famous and a pop superstar. A heady mixture of music, parties and adoration beckoned. But very soon, life had taken its toll. Cat Stevens was close to death, fighting to beat tuberculosis. He was to survive, but he would never be the same. His musical talent continued to grow, but he found himself unable to escape the bigger questions: What was his true purpose on this earth? What happens after? After much searching, Cat Stevens discovered Islam in 1977 and became Yusuf Islam.
Vilified and mocked by the press, Yusuf held true to his beliefs, becoming an ambassador for peace and a bridge between worlds, sacrificing his music career for his faith. After 25 years of silence, Yusuf picked up his guitar, once more, embracing both his faith and his vocation.
Why I Still Carry A Guitar is Yusuf Islam’s memoir. The book is a  moving story of  his journey from his life as a boy experiencing the dizzying heights of music superstardom to a man defined by his faith who chose to give up music for over a quarter of a century but has returned to deliver his powerful message of peace to the world of music and art. Why I Still Carry A Guitar is a remarkable work and, like its author, transcends the East-West divide, telling the story of a unique man bringing worlds together against a backdrop of international politics, religion and the music industry.
During the 70’s in USA and Europe, his songs (with the name ‘Cat Stevens’) influenced the youth and dominated the global charts. In 1994, Yusuf Islam established a media company, ‘Mountain of Light’, producing educational materials in English and specializing on the young generations, beginning with an audio-book on the life of the Prophet (p.b.u.h.) in English. In 2003, Yusuf Islam received the ‘World Social Award’, and in 2004 the ‘Man for Peace’ award. Over the years, he worked hard to correct the picture projected by large sections of the media of Islam, which is usually negative. So, in 2006 he decided to return and sing songs with a good message for the wide mainstream public again. He writes:
“My abrupt departure from the spotlight confused many of my friends and fans…My surprise return to music may again raise many eyebrows and invite questions from people. While some critics might view it as a step backward, I see my music as a positive continuation of my intention to build roadways to peace, convey a moral message and dispel ignorance. Having made a study of the subject for more than 25 years”indicating that I do not take the issue lightly”I am now personally sure of a broader allowance for art and music in Islam. This is because of the fact that there is more evidence indicating allowance, rather than prohibition, based on the Quran and Hadith.
…the reality is that music is played everywhere…The fact is that music is universally present in this world, even in the jungles, oceans and desert…Nature has its own magnificent song in praise of the Creator” .
Splashed with amazing colour pictures, Why I Still Carry a Guitar is a must-read book that can stir one’s conscience and make us think that though we may be born in a certain faith context, as we grow up, rather than blindly swallowing whatever has been told to us by others, we should to study deeply matters of faith independently and seek thereby to get a better understanding of God. Then religion may become sheer music to the ears!