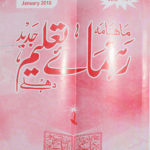 Rehnuma e Taleem Jadeed, is the new avatar of the 113-year old Urdu monthly Rehnuma e Taleem. The magazine has been launched recently from Delhi. The original Rehnuma e Taleem was brought out by Sardar Jagat Singh from Pindigheb, a town now in Punjab province of Pakistan in 1905. Jagat Singh migrated to Delhi during the Partition and re-established the magazine. The founder’s son Sardar Harbhajan Singh carried the mantle forward and continued it till his death in 2005. It was about to be closed when Mr. Abu Noaman who is the new editor and who had been associated with the magazine since 1968, relaunched it by registering it under the new name Rehnuma e Taleem Jadeed. It is into its 11th year of publication. Some of the issues received by the Islamic Voice suggest the magazine to be of literary nature, carrying several short stories and ghazals. However, one of the recent issues highlighted the life and achievements of Mr. Munawwar Peerbhoy, one of the two main architects of the 27 educational institutions set up under Azam Campus in Pune. Veteran Delhi journalist Sohail Anjum is the editorial advisor. Annual subscription is Rs. 150. Address: k7/6, Gali No. 22, West Gondha, Delhi-110053, Ph: 92680-83585. n