The tiny startup crosses a One $million Milestone 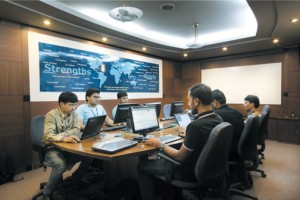 Vision of empowering the underprivileged classes was never ignored in the ascent to the current high.

From a tiny startup in 2005 to a company with one million dollar turnover, the eight years for mPower Labs must have been a long and uphill road. In the competitive world of Information Technology, where IT units take birth, merge, are taken over and even shut shop, mPower’s has been a saga of sheer consistency.
The company grew out of a basement of a mosque in Bangalore’s Ilyasnagar locality in 2005. Today it occupies a premises around a square bang opposite the city’s famous botanical garden Lalbagh. In between, it even operated out of a building skirting a graveyard. But there never was any paucity of vision and energy to turn that into a reality. mPower has on its list of clients companies such as Xerox based at Dallas, Lulu Supermarket of Dubai, CISCO and US Oncology. Last month, when it crossed the one million dollar milestone, it went for a modest bash in a resort on the outskirts of Bangalore. Having kept away from ritzy addresses and glitzy exteriors for so long, the company was just about celebrating its arrival onto the stage from where outfits take wings.
According to its CEO Abdullah Akbar Ali, the journey was long and hard but never lacking in spirit and grit. “There were times when it had to seek interest-free loans from individuals and team members operated on personal computers (PCs). Though the directors were never sure of disbursing salaries on time, in ninety of the hundred months the company has lived through, it could maintain its commitment to the employees.”
mPower began with a vision to provide better, faster and cost-effective IT solution and has built up a solid reputation today in web application and in constructing high-end portals for companies with budgets ranging from Rs. two million to twenty millions. Innovation therefore took the lead role with Ahmed Hassan, A BITS Pilani graduate taking the command. The first recognition came its way in 2008 when the company was conferred the ‘Lockheed Martin India Innovation Award’ for its software mPire. It was a software product based on Java meant to help developing web-based application in one-tenth of the actual time. A technological breakthrough worthy of great value, mPire helped propel the company into limelight, but scarce resources for marketing did not allow mPower to profit from the product as it deserved.
Says Ahmed Hassan, “My happiness comes not from the fact that mPower has crossed one million mark focusing on one Open Source technology, but from the fact that we achieved this mark demonstrating the true Islamic values and overcoming all challenges, the whole team standing together as one team as though we are a single structure joined firmly.”
At no stage the company departed from its goal of empowering socially underprivileged. Mainly recruiting fresh engineering graduates from tier two and three towns, mPower could groom and polish a lot many youth, both girls and boys, and helped them find firm footing in the IT world. It was a rare mix of profit with social engineering. Says Syed Habeeb, Head HR at mPower, “Our joy knows no end when sons of snack sellers could be seen explaining complicated technology with high-end company honchos.”
The pioneering team had just seven souls who included four founders. Today it has 80 individuals logging a retention rate of 80 per cent, something of a record in an industry known for its revolving doors.
Not merely this. The company can take due pride in the fact that several professionals with previous associations with MNCs such as Dell, IBM and Sun Microsystem have all along been working with the company. Sharath Sharma, former CEO of Yahoo and Sanjay Dutt, Vice President of Infosys have also been guiding mPowerians for the last few years.
With open space portal technology being its forte, mPower is setting its sight high i.e., achieving a target of Rs. 25 crore by 2015. It also plans to diversify into other emerging areas such as cloud computing. “With recession showing its back, it won’t be a tall order, Allah willing”, proclaims an insider. (With inputs from Azmathullah Shariff)