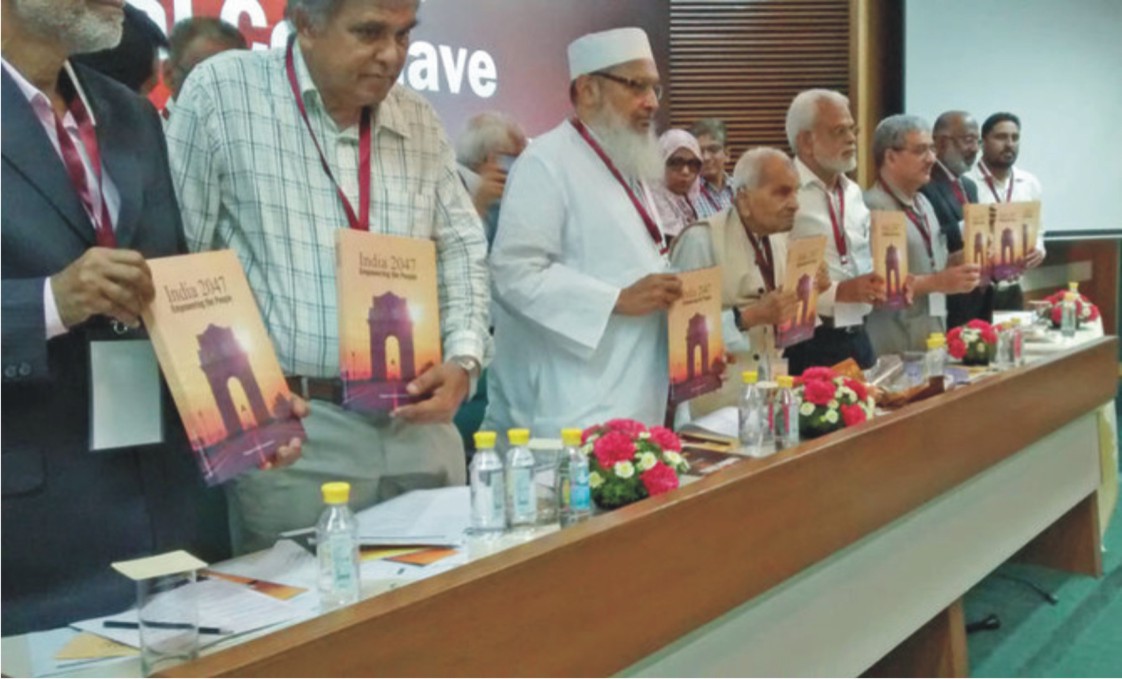 Introduction to Empower India Foundation and its Project India-2047

“Role of NGO’s in the upliftment of the community”.

Empower India Foundation is a Delhi-based National NGO. It has a team of highly dedicated Intellectuals, Educationists, Professionals, Social Activists, and a host of others. EIF evolved out of the primary objective of empowering the Community through its various initiatives.
We developed the idea of ‘Empowered Community’ – a community with self-esteem, self-respect, freedom, security, strength, and power. Total Muslim Empowerment became our agenda. The Natural course of change is to change from charity takers to charity givers that Islam’s fundamental principles. In the Empowerment Ladder, the first step is to move from Charity to Relief, from Relief to Welfare, from Welfare to Development, from development to Sustainable Development, and then Empowerment, a big movement. The vision of EIF is not a New Muslim Community but a New India; it is a national agenda to be inclusive of developing New India.
Empowerment means we are no more dependent. That is the stage we are aiming at, But the question is, who will empower us? Others cannot bring Empowerment; it can be obtained only by Self-Initiatives. The Community itself is the Capital, and its members are the agents of Empowerment.
With the basic objective of empowering the Community, we started drawing a roadmap to achieve the set goal through proper planning. The Community has to set a broader vision, undertake a more comprehensive mission, and chalk a long-term plan.
The idea of setting a vision and preparing a long-term action plan originated at EIF on 15th August 2013. The homework done includes personal discussions with scholars and researchers, attending various academic seminars and conferences, collecting data from official sources, analyzing the contents of different study reports, and assigning Focus Area Groups to prepare the drafts. Six national seminars and about fifty city-get-together programs in 15 states were organized as part of the project preparation.
Project India -2047 took its shape through brainstorming sessions in National Seminars organized by EIF in many cities across the country on “India 100 years (1947 – 2047) Road Map to 2047, a journey to the second century India’s independence. The aim was to gather inputs from scholars and experts. The basic question was what to do in the next 33yrs? Dreaming the future in the light of past experiences is not based on guesswork but on the available factual data. This Project is based on a sound foundation of proper knowledge. It is not just a shallow exercise; it is based on the quest for facts from different sources. The 2047 century is not a watershed in history, but it signifies the end of a century of independent India and a new era. Hence, we call it India-2047. It also marks the people’s desire and determination to improve their lot through their actions. It means that the basic dynamic should come from the people themselves for change from bad to good or good to bad. Allah (swt) says He will not change the condition of a people unless they decide to change themselves (13:11).
Empowering is building the future of one’s choice; instilling confidence and motivation carries people ahead. We developed a broad-based vision-to-action document, India – 2047 -Empowering The People. We prepared this Project with long-term and short-term sub-plans for New India-2047. Eleven focus areas were identified, Governance, Economy, Education, Health, Media, Women, Children and Youth, Social Reformation, Civil Rights, Broad-Based Alliance, Culture and Heritage.
Justice Rajindar Sachar, Former Judge of Delhi High Court and the Chairman of Sachar Committee Report, released the historical document”India – 2047: Empowering the People” on the 70th Independence Day of the nation in 2016, at the National Conclave conducted by EIF, India Habitat Centre, New Delhi. While Speaking on this occasion, Justice Rajindar Sachar said, “EIF has done such a stupendous job which the governments of the nation could not do in the past 70years. He said, “India – 2047 project is like taking up the cudgels to empower Muslims and other marginalized communities of India.”
The Chairman of EIF,E.M.Abdul Rahiman, said that ourvision is of an inclusive Just India, as the nation will remain handicapped until all sections are equally empowered. The Project Document India – 2047:Empowering the people is a community-centered project, but not a communal project and is also a national project”. Let us be the Agents of Change by volunteering, networking, micro-planning, executing, grass-root level system building, etc.”
This Project is unique because it is developed with intellectual insight and revolutionary vision; it has already made a mark on the quality of work it is engaged in to reach out to the Community at all levels throughout the country. Let us have intellectual curiosity and be open-minded to support this Project to empower the Muslim Community. EIF is a Catalyst; anyone can join to empower themselves and the Community. It’s a long-term Project that needs an extensive network of people to join and take its set goals to the nook and corner of the country.
Seven Pilot projects were also chalked out and implemented phase-wise.Each Project has a fixed timeline to achieve the targets. The Pilot Project Management teams visited Rajasthan, Uttar Pradesh, West Bengal, Bihar, and Assam, where most pilot projects are implemented. These Pilot projects are Self Help Group Cluster, Safe Drinking Water, Service Centres/Information Centres, D-Voters/ Doubtful Voters, Literacy, Finishing School, and Master Trainers Development Programme (MTDP). These projects are launched in different parts of the country.
Conclusion:
1. Study, research & publication activity related to empowerment.
2. Chapter formation in different regions aiming to translate national plan of empowerment into local actions.
[email protected], www.empowerindiafoundation.org www.india100years.com.