Some Fifty Years of INSAN

INSAN’s half-century legacy began as part of the founder, Dr. Syed Hasan’s voyage to bring the torch of knowledge to this region in January 1965. 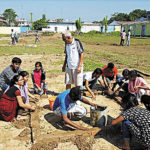 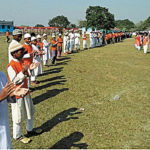 We all are in journey”we as humans, as well as our societies and institutions. Our paths and destinations may appear to be different, at least at times, but we all go through an abundance of experiences. At each stop along the way, we rejoice the moment, reflect on the past, and look towards the future.
It was a cold morning in Delhi on January 5, 1965. A gathering of people was at the Delhi airport to welcome back Dr. Syed Hasan who was returning from America after having spent 10 years there. When he arrived, to everyone’s astonishment, he landed with no radios, tape recorders, TVs or other fancy American stuff usually expected from those who come back from abroad, but rather 7-8 big storage trunks filled with books. At that moment, no one could imagine the incredible journey that was about to unfold.
INSAN’s 50 year legacy began as part of the founder’s voyage to bring the torch of knowledge to this region in January 1965. He had first visited the area back in 1952 and was struck by its state of backwardness, especially in education. After returning from America, he headed to Kishanganj to start his educational and humanitarian mission. After nearly two years of groundwork, INSAN was born as an elementary school with two teachers and 36 students on two rented bamboo huts.
For the next 50 years, INSAN would take on a phenomenal journey led by Syed Bhai which would leave a profound impact on millions of lives, and on the region itself, and beyond; and eventually, it would grow to inspire many national socio-educational policies and numerous projects in India and abroad.
Most people know INSAN as an educational institution, namely INSAN School, which evolved into INSAN College, and later INSAN Group of Institutions. However, INSAN defined its own unique character, a blend of educational and humanitarian missions, hence its very metaphoric name, INSAN which means human and mankind. INSAN never remained just a typical school or college. Even its academic programs have powerful humanitarian messages:
Insaan bane ge hum insan banayen ge
Jeene ke tareeqe ab seekhen ge aur sikhaein ge
Pledging to become and teaching to be humans
Learning, embracing, and teaching ways to live in harmony
Jis me na koi hoga nanga na koi bhooka
Ab nai basti hum ayesi basayen ge
None will be hungry or unclothed
Let’s strive now to create such a world
Kuch zaat ho kuch mazhab kuch taur tareeqe hon
Mil jul kar magar rahna hum sub ko sikhaeyen ge
(Irrespective of caste and creed, and ways of living
Let’s strive to reach across and to teach how to live with amity)
And, these were not merely words or slogans; these were rather a regular part of the student learning process, mantras to live by. For example, everyone at INSAN called each other Bhai (brother) or Bajie (sister) including teachers, students, even kitchen workers or toilet cleaners. Students had to participate in various volunteering work both at and off campus. INSAN creates an atmosphere where people from all backgrounds live, learn, and work together.
(Extracted from twocircles.net)