This Bohra Colony is a Model for All

Islamic Voice 0 June, 2016 12:00 am
Close the Book, Open Your Mind
An Inclusive Model of Education
With Seeds of Success Sunny Days are here Again

In Yendada, every house has a green area or kitchen garden as well as rainwater harvesting facility. 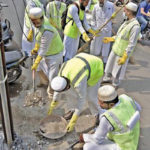 Vizag: Yendada can be easily reckoned as a model colony. The highly prosperous residents belonging to the Dawoodi Bohra community did not wait for the Greater Visakhapatnam Municipal Colony (GVMC) to provide them with pucca roads and proper drainage system, but did it themselves by spending lakhs of rupees. Every house has a green area or kitchen garden as well as rainwater harvesting facility. They have strictly implemented Swachh Bharat, education for girl children and ensure that there is no wastage of food. What’s more, they have a unique hygienic centralised kitchen in their mosque that delivers food to every household six days a week. This arrangement is mainly to eliminate inequality between the rich and the not-so-rich and to promote women empowerment, so that women get adequate time for their creative pursuits rather than staying confined to the kitchen. Women can also pray inside the mosque. On two-acre land in Yendada, around 115 Shia families comprising a population of about 400 have been residing since almost a decade. Apart from these, in various other parts of the city, another 65-70 families are spread out but the majority dwells in Mubarak Colony. This business community had migrated to the Port City from Gujarat in the late 1970s and speak Lisan-ud Dawat, a language somewhat similar to Gujarati. “In whichever country we reside, we consider it our responsibility to support the government in the economic progress and overall advancement of the nation. We don’t have a single unemployed member in our community. Rather we provide employment opportunities to others. In Vizag, most of us deal with hardware and industrial supply,” said Adnan Sabuwala, president of JCI Visakha Valley and a member of the community.
Explaining the concept of the centralised well-maintained kitchen, Abbasbhai Sabuwala, said, “Under this scheme, lunch is daily cooked in the mosque kitchen and supplied at 12 noon in tiffin carriers meant for every Bohra family in the colony as well as in the city. There’s also an App which can be utilised by the families to inform before hand if they are going outside and wouldn’t require lunch, thus food wastage is prevented. Though they have a hi-tech madrassa adjacent to the Mohammadi Masjid, almost all children commute to the top English medium schools in the city by school bus or private cars. Needless to say, every house in the colony are like picture-postcard bungalows and has lawns and gardens as well as well-decorated rooms. A couple of posh multi-storied apartments have also sprung up in the colony, equipped with swimming pool, gymnasium and a tiny pond for ducks to add to the beauty. Credit for the interior decoration goes to the women in the families.
(Source: www.timesofindia.indiatimes.com)