Pyare Khan of Nagpur is winning accolades on social media for donating two tankers of medical oxygen. In the last few days Khan has donated 32 tonnes of oxygen worth Rs 10 million or one crore for free to hospitals for covid-19 patients who are gasping for oxygen.
“The number of patients in Nagpur has increased and there is shortage of oxygen, ventilators and medicines. In such a situation, we could do something to save the lives of people,” Khan said, according to a report appeared in local newspaper Lokmat. 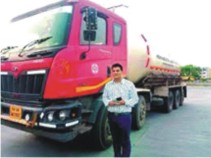 Social media users have written posts in appreciation of Khan and thanked him for his generosity amidst the unprecedented crises that the country is facing.
Pyare Khan drove an autorickshaw on the roads of Nagpur till 2004 when his fate took turn for better. That year one day he approached a bank and sought a loan of Rs 11 lakh. The bank was initially reluctant to give him that amount since he had not much to show by way of collateral. But he pursued and got it. He bought a truck and paid the loan back in two years.

Right now he owns a fleet of more than 100 trucks and runs about 3000 vehicles on hire. Ashmi transport, which he incorporated in 2013, is now a Rs 400-cr-turnover company. It has nearly a dozen branches in the country transporting power and steel equipment across the country and even abroad.