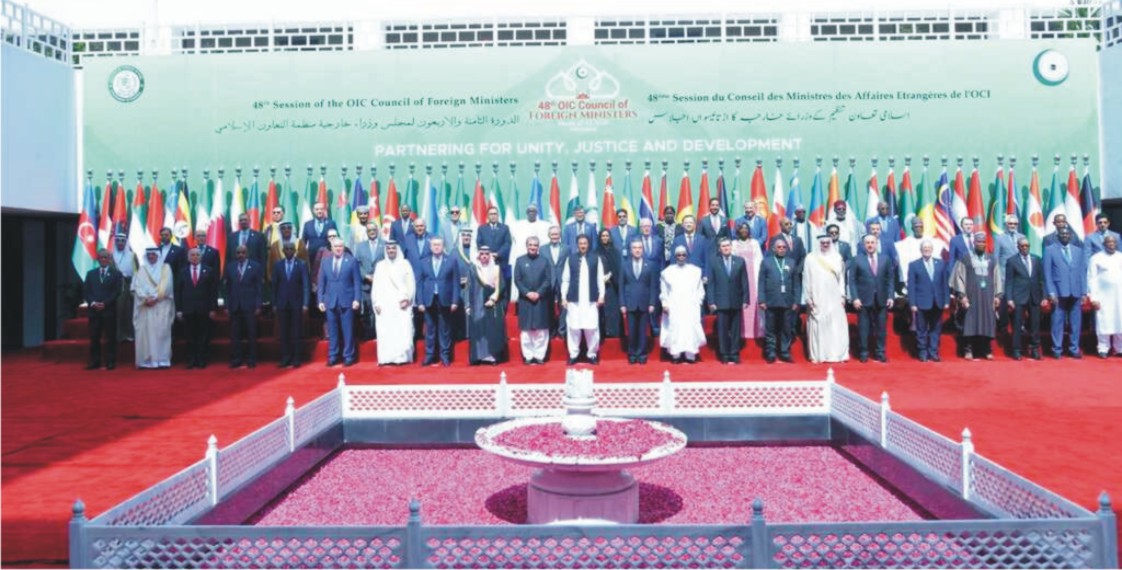 Staff Writer 0 May, 2022 5:34 pm
Guru’s blessings continue for Malerkotla
Thousands of weavers and their families in eastern UP suffering from acute indebtedness, and beggary: Study
All India Muslim Personal Law Board 27th Public Session

Islamabad: After the summit’s 48th two-day session, the OIC Council of Foreign Ministers released a declaration. Widespread Islamophobia and deliberate attempts to smear Islam’s sacred image and undermine the Muslim world’s peaceful coexistence with other cultures and religions, it said, posed growing threats to international peace and security and rising tensions and instability in many parts of the world.

“Partnering for Unity, Justice, and Development” was the theme of the OIC Council of Foreign Ministers’ 48th session held in Islamabad on March 22-23, 2022.
Reaffirming the resolve to fulfill the solemn pledges contained in the OIC Charter and Declarations of all previous Summit Conferences and the Councils of Foreign Ministers, Islamic nations’ Foreign Ministers said the OIC is guided by the noble injunctions of Islam and the Quranic verse – “Hold firm to the rope of Allah collectively and create no dissensions” and “The believers are naught else than brothers; therefore, make peace between your brethren and fear Allah that happily, ye may attain mercy”,

Determining to strengthen further the bonds of unity and solidarity among our people and the Member States,

Noting the growing threats to international peace and security, as well as rising tensions and instability in many parts of the world, which are exacerbated by long-standing unresolved conflicts, widespread Islamophobia, and deliberate attempts to tarnish Islam’s sacred image and undermine the Muslim world’s peaceful coexistence with other cultures and religions.

Solemnly declare as follows:
• We express deep concern over the rising trend of Islamophobia and anti-Muslim hatred and strongly condemn all attempts to denigrate the sanctity of the Holy Prophet (pbuh) and Islamic Symbols to inflame sentiments of Muslims across the world and to foment inter-cultural divisions and tensions.
• We call upon the international community to prevent incitement to hatred and discrimination against Muslims and take adequate measures to combat defamation of religions and acts of negative stereotyping and stigmatization of people based on religion, belief, or ethnicity.
• We renew our commitment to promote and uphold the rights of Muslim communities and minorities in the non-OIC Member States. We extend our continued support to the OIC’s role, efforts, initiatives, and good offices to this end.
• We denounce the systematic and widespread policy of discrimination and intolerance against Muslims in India, which has led to their political, economic, and social marginalization. We are deeply alarmed by the most destructive attacks on the Muslim identity in India as manifest in the discriminatory laws and policies targeting the Hijab. We call upon India to immediately revoke such discriminatory laws, ensure the rights of the Indian Muslims and protect their religious freedoms.
• We welcome the adoption of the UN General Assembly resolution proclaiming 15 March as the International Day to Combat Islamophobia.
• We call on the OIC Member States and the international community to raise awareness at all levels in countering Islamophobia, building a better understanding of Islam and its precepts and fostering a message of tolerance, peaceful coexistence and inter-faith and cultural harmony among all religions, races and nations.
• We also welcome the decision by the OIC to appoint a Special Envoy of the Secretary-General on Islamophobia, to lead a collective effort and institutional engagement with the international community.
• We request the OIC Secretary-General to initiate regular inter-civilizational dialogues on the sidelines of Annual Coordination Meeting (ACM) and the UN General Assembly sessions as a matter of priority.
• We also request the OIC Secretary-General and the Council of Foreign Ministers Chair to engage the management of social media platforms, including Facebook, Twitter, and Instagram, for them to take institutional and technical measures to filter and remove any content that incites violence and hatred against persons and communities based on their religion, belief or ethnicity.
• We call on the Member States and the OIC Secretary-General to strengthen the Islamophobia Observatory by allocating human and financial resources necessary for its effective functioning and to facilitate networking with other Islamophobia Centers and mechanisms around the world. We urge the Secretariat to explore the possibility of upgrading the Islamophobia Observatory into a full-fledged Department of the General Secretariat.
• We reaffirm OIC’s strong position against any attempts to equate peoples’ just and legitimate struggle for self-determination and liberation from foreign occupation with terrorism.
• We are deeply alarmed at the rising terrorist threat posed by racially, ethnically, or ideologically motivated individuals and groups, including Islamophobic, supremacist, far right, extreme-right wing, violent nationalist, xenophobic groups and ideologies in various parts of the world.
• We are concerned over the growth in humanitarian emergencies across the globe, including in Muslim countries. We express our resolve to strengthen joint Islamic action in the humanitarian domain to alleviate the suffering of refugees and displaced persons resulting from armed conflicts as well as natural and other disasters.
• We reaffirm our dedication to the eternal Islamic tenets of peace, tolerance, unity, harmony, and justice to pursue the development and prosperity of the Ummah and humanity.
• We re-emphasize the centrality of the question of Palestine and Al-Quds Al-Sharif for the Muslim Ummah, reaffirming it’s principled and continued all-level support to the Palestinian people to regain their inalienable legitimate national rights, including their right to self-determination and the independence of the State of Palestine along the 1967 borders, with Al-Quds Al-Sharif as its capital.
• We also reaffirm our duty to protect the right of Palestinian refugees to return to their homes in accordance with UN General Assembly resolution 194 and to counter any denial of these rights unequivocally.
• We underscore a solid commitment to the sovereignty, independence, territorial integrity, and national unity of Afghanistan. We affirm our abiding solidarity with the people of Afghanistan and express the confidence that the resilient Afghan people will continue to steer their country on the path to progress and prosperity.
• We strongly condemn the atrocities perpetrated against the Rohingya Muslim community in Myanmar. We call for urgent action to uphold their fundamental rights, end their targeting and stigmatization and for the Government of Myanmar to allow and facilitate the return, in safety, security, and dignity, of all Rohingyas, displaced internally and externally, including those forced to take shelter in Bangladesh.
• Convinced that over 1.5 billion Muslims, across five continents, endowed by the Almighty Allah with tremendous, spiritual, human, and material resources, are destined to realize more significant social, economic, scientific, and technological development and integration within the Muslim world and beyond.