What’s important is not the shape of the chapattis, but your intention and your effort!” 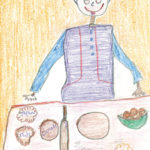 Although they may have meant well for their children, Roma’s parents didn’t give them the love and attention that they needed. Roma’s father spent little time at home, and Roma couldn’t recollect him ever sparing even five minutes with him for a friendly conversation. As for Roma’s mother, she was always nagging him, telling him what to do and what not to and generally putting him down. There was no real love in the house, and if Roma’s parents or siblings ever talked with each other, it generally ended with snapping and snarling, if it did not start that way. It was a completely dysfunctional family.
Partly because of how things were at home, Roma grew to become a nervous young man. He was scared of loud and pushy people. He found it difficult to take decisions and would often change his mind. In the presence of strangers, he would sometimes stammer and get stuck for words. He feared others making fun of him.
One day, Roma visited a place of worship. After the worship, the people there got together to lunch, to which everyone was welcome.
Roma wanted to participate in the cooking too. But when he saw many people in the kitchen, his heart fell! He was scared to ask if he could join them. What if they said no? What if he made a mistake and they scolded him”just as his mother often did? He didn’t want to appear silly.
But if God wants something to happen, nothing can stop it. Roma mustered up courage and approached a man who was busy rolling chapattis. ‘I’d also like to help,’ Roma said, his heart beating heavily. He was frightened of how the man might react.
“Oh sure!” the man replied. “That’s very nice! Join us! The more the merrier!”
You can’t imagine how happy Roma was, being so warmly welcomed! No one in his family had ever spoken to him like that!
“I’ve never made chapattis before,” Roma said. “I don’t know if I’ll be able to make them really round. I hope I don’t make too many mistakes.”
“Don’t worry about that!” the man smiled. “What’s important is not the shape of the chapattis but your intention and your effort!”
No one had ever spoken so encouragingly to Roma before, not in all his twenty years!
The first few chapattis that Roma rolled came out in various shapes and sizes, like maps of different countries! But the man’s kind words so touched Roma that he was determined to try to make them as round as possible. And in a short while, Roma’s chapattis came out just as they should!
“My goodness! You’re an expert chapatti-maker now!” the man exclaimed, giving Roma a friendly pat on the back.
“It’s thanks to your encouragement, brother,” Roma replied. “Believe me, you’re the very first person I’ve met who’s treated me this way. God bless you lots!”
Roma so enjoyed himself that day that he decided to visit the place of worship every week. And that’s where you’ll find him after the worship gets over”in the kitchen, busy rolling out chapattis and enjoying the fellowship of the others there.
The encouragement that he received from a stranger that day touched Roma so deeply that he’s grown greatly in his confidence, in his ability to do things and in relating with other people.
See what wonders just a few encouraging words can do!