Book Review – The Story of Khadija 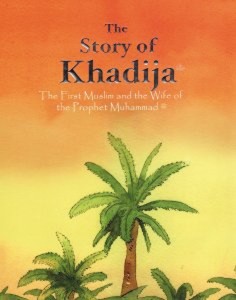 The book The Story of Khadija introduces the life, services and sacrifices of the most noble wife of Prophet Muhammad, peace be upon him, to the children in the most simple words and lucid style. Khadija, as we all know was of a noble lineage and her and the Prophet’s ancestors met at the level of great grandfather Qusayy ibne Kilab. She was the first to accept Islam. Most would tend to attribute it her being the wife of the Holy Prophet. But the fact is that she trusted her husband more for being a straightforward and truthful man than being her husband. The Prophet had earned her respect and trust much before she came to marry him.
A rich businesswoman, Khadija was mother to nearly all the children of the Prophet. Having shared his partnership for 25years, she gave him company through the most joyous part of his life as well as the days of trials and tribulations.
Author Saniyasnain Khan has graphically described the ambience in which Khadija’s family lived close to the Harem of Kaaba in Makkah and illustrations by Gurmeet help the reader to visualize the frugal life of the 6th century Arabia.
Khadija commanded great respect from the Quraysh and the Makkans but it was of no avail once she joined her husband in his mission. She remained steadfast and stood by the Prophet through thick and thin. Two of her daughters from the Prophet were even divorced by Utaba and Utayba, mainly because she supported her husband’s mission to transform the society. The narration of her days in Shi’b Abi Talib outside Makkah is heart-rending. But endowed with an indomitable spirit, Khadija would not hesitate sacrificing all comforts of life for the sake of Islam. She was a strong pillar of support for the Prophet and at no point of time the thought of backing out from supporting him crossed her mind. No wonder then why the Holy Prophet described the year of her passing away as ‘the Year of Sorrow’
The narration refers to the persona of the Prophet as ‘Prophet Muhammad’ even while presenting accounts of the phase of his life prior to his being conferred the Prophethood (page 13 and 14). This seems a bit awkward and represents the usual dilemma and hesitation faced by the Muslim authors in dropping honorific appellations from the Prophet’s name even when the objectivity urges them to do so.
The book has very deservingly bagged the Sharjah Children’s Book Award this year. Production meets the high standards of the modern markets and English-using Islamic clientele.
(Reviewed by Maqbool Ahmed Siraj)