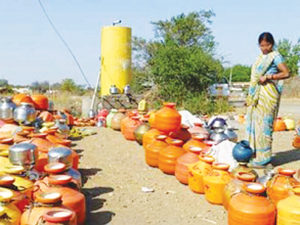 Latur has been in the news for its drastic water crisis, but one man gives away free water to help residents recover from the crisis. The two-year drought has left the city, with a population of half a million people, parched and dry, just like seven other districts in the drought-hit Marathwada region. The government has been sending water trains to the area in hopes of fixing the situation. Called the Jaldoot, the train has carried over four million litres of water in seven trips from Miraj, south Maharashtra, to Latur. Meanwhile, Sheikh Mateen Musa’s generosity comes as a blessing to many residents of the water-scarce city.
A mathematics teacher in a local school, he gives away nearly 10,000 litres of water everyday, and does not ask for any monetary compensation. For the past three months, Mateen manually draws water from his bore well and distributes to it to people who form a queue with their buckets and containers.
His benevolence provides around 300 households with a relief from the water crisis. Residents who have faced water shortages, first for few days, then weeks and then no water for months, are immensely grateful to him. He doesn’t set a limit, either. “He asks us to take how much ever water we want, for free,” says one of the residents. According to this LiveMint report, at least 60 million litres of water a day is required to satisfy the half million residents of Latur. This works out to 100 litres a day for every person. The government’s water train initiative, however, has been able to theoretically provide one litre of water per person. It is the generous efforts by residents like Mateen that paint a small but important picture of hope during such dry spells.
(Source: thebetterindia.com)