Rolu and the Visiting Monkey

Islamic Voice 0 July, 2018 12:00 am
Monsoon
Sri Lankan President seeks Muslim Support for Reconciliation with Tamils
It’s All in the Mind 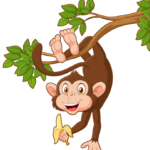 Rolu lived with his parents in a busy part of the city. It had been a very different place earlier. There were lots of trees then, and many animals and birds lived there. But as people went about cutting the trees down to make buildings, hardly any of them remained.
One morning, Rolu and his parents were having tea when a monkey with a red face and a long tail hopped in through a window and made straight for the kitchen, grabbing a big bunch of bananas!
Rolu’s father spotted the monkey and leapt to his feet. ” Thief! Thief! Drop the bananas!” he shouted at the top of his voice as he ran after it.
The clever monkey was too swift for Rolu’s father. It raced out of the house.  Then, it jumped onto a ledge and turned around to make a naughty face at him!
“These monkeys have become such a nuisance!” Rolu’s father fumed. “In the last two weeks they’ve been here five times. And each time they’ve run off with things. The last time it was two loaves of bread. Before that it was a box of biscuits. Today it was the bananas. And who knows, tomorrow they may steal our money or our clothes!”
“Hahaha!” Rolu burst out laughing. “How funny that would be, Papa! Imagine a monkey running off with your suit! What would you wear to office then?”
Rolu’s father didn’t find that at all funny. “We just have to do something about the monkeys,” he insisted. “We can’t allow them in anymore. Maybe we should put a mesh on the windows to keep them out. I think I’ll call the carpenter to do that tomorrow.”
Rolu didn’t like what his father had said. He loved animals very much. He knew that his father wasn’t in a mood to listen to him. So, later in the day, when his father went off to office, Rolu sent him an email message. In his message, he wrote:

Dear Papa,
I felt sad that you got so upset about the monkeys this morning. The monkeys have been around here even before we got here. There used to be many trees here. The monkeys lived there. Then, people cut the trees down and made big buildings, including the one where we live. And so, the monkeys lost their home. They lost their food also, because they used to eat fruits from the trees. So, it’s actually we who’ve robbed the monkeys, and not the other way round. To make up for that, maybe we can give them a banana or two if they happen to visit our home once in a while. They must be very hungry, otherwise why would they come?
What do you say, Papa? I hope you’ll agree with me.
God says that we should be kind to others. So, we should be kind to monkeys too.
Love,
Your son,
Rolu