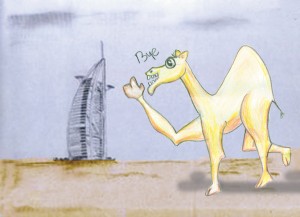 By Yoginder Sikand
All across the desert, the camels were very upset. The people they had lived with for centuries had decided that they had no use for them any longer and had turned them out of their homes. As long as humans had found camels useful, they had treated them with special care, housing them in smart stables, giving them fruits to eat, carefully combing their coats and decorating them with richly-embroidered saddle-cloths. But now no one bothered about them at all. The poor things were now left to graze in garbage dumps all day.
You can imagine how upset the camels all were at being treated so shoddily. After all, for as long as they could remember (and camels have very long memories), they had served the desert folk with love and without any complaint. But for them human life would have been impossible in the desert. Humans used them for many purposes”for travelling, for carting goods, for ploughing fields, for drawing water from wells, for making coats and blankets from their wool, and for their milk.
But times had now changed, and even deep in the desert people began dreaming of living as city folks do. ‘Travelling on camel-back is too slow and old-fashioned,’ they said to themselves. And so, they coughed up almost all their savings to buy the motor-bikes, jeeps and cars that they saw city people riding about in on the television sets that they had recently acquired.
Representatives of city-based companies began to flock to remote desert hamlets in order to convince the desert folks to buy tractors to plough their fields. That was a more ‘modern’ and ‘efficient’ way of farming, they convinced them, than slow-moving camels. Close on their heels followed other travelling salesmen from the city, who taught the desert folks that expensive diesel-driven pumps were a more ‘sensible’ way of drawing water from their wells than using camels for this purpose, that costly, factory-made blankets were ‘better’ than camel-wool ones, and that the milk from city-based dairies that came in plastic bags was ‘tastier’ than camel’s milk.
The denizens of the desert easily believed whatever these men told them. After all, they were from the big city, and the desert people had allowed themselves to believe that whatever city-people thought was best. They wanted nothing more than to become just as city-people were.
And so it happened that in a short time almost all the inhabitants of the desert had abandoned their camels. They turned them out of their stables, replacing them with cows and goats, which they reared to sell in the market in the hope of making a neat profit. Things had come to such a pass that they even refused to let the camels graze in their fields. That, they thought, would be a waste of precious fodder, which they could sell instead to make more money to buy more city-made things.
The poor camels now had nowhere to go. All day they would linger about in the garbage dumps on the fringes of the villages and bemoan their plight. They really didn’t know what to do.
Just when almost all the camels had given up hope, Sandy, a young she-camel, hit upon a brilliant idea one day. ‘My granny used to tell me stories about our ancestors,’ she said to her friends as they munched on a pile of rotten vegetables in a garbage dump. ‘Thousands of years ago, she told me, much before human beings invaded the desert, we camels freely roamed the sands, going wherever we pleased, eating the berries, roots and juicy cactuses that Nature freely gave us, and drinking in desert pools. We could do the same now, couldn’t we, instead of wasting our lives in these filthy dumps?’
‘You mean, we can just trot off deep into the desert on our own?’ said the other camels in surprise. ‘There aren’t any humans there to feed us there, and certainly no garbage dumps to forage in.’
‘If our forefathers wandered in the heart of the desert when there weren’t any people there and had no problem finding food and water, surely we can do that, too,’ cried Sandy. ‘Nature hasn’t changed, even if human beings have. If Nature gave our ancestors enough to eat and drink, she’ll do the same with us, too, I’m sure. And, what is more, we’ll be free”free from servitude to human beings and free to roam and do just as we please! Wouldn’t that be wonderful?’
‘Sandy! You clever thing! Why didn’t we think of this before?’ chimed all the other camels.
Do you know what happened next? Sandy went around the desert, sharing her plan with the forlorn camels that she met at the village garbage dumps. Then, on an appointed day, she gathered all the camels”over two thousand of them”and led them, in a majestic procession over mountains of sand, heading deep into very centre of the desert, where no human dared to tread.
And that’s where the camels still live, free and happy, no longer at the mercy of men, just as their ancestors had lived before humans had strayed into the desert and trapped them.