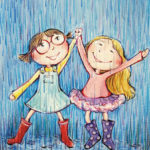 Salma and Sita loved doing things together. They lived in the same building and studied in the same play-school. Most afternoons, after they had lunch and had rested for a while, the girls would go down to the backyard of the building where they lived, where they would have great fun. But that afternoon it was very hot, and their mothers said they ought to stay indoors. And so, Sita went over to Salma’s house to play.
The girls worked together on a jigsaw puzzle, while Salma’s mother watched television. Sita and Salma didn’t watch TV much, and they wished their mothers wouldn’t spend so much time doing that.
“My goodness!” Salma’s mother announced all of a sudden. “It’s going to be a very hot summer this year! Big water problem, too!”
“How do you know that, Mummy?” Salma asked as she fitted a bit of the puzzle in its place.
“That’s what the TV says,” Salma’s mother replied.
Salma and Sita turned their attention to the TV. Yes, the next few months were going to be very hot, they heard a man announce, and people would get water only twice a week.
“Oh Aunty! How are we going to manage?” cried Sita. “Where will we get water to drink? I hope we don’t go thirsty!”
“And what about water to wash and cook, Mumma? And for the plants?” added Salma, who was as worried as Sita was.
“I’ve no idea, dear,” Salma replied. “It’s never been as bad before. I hear this will be the hottest summer we’ve ever had.”
The girls knew from the way Salma’s mother spoke that the matter was really very serious.

*
Later that day, after they had put away their toys, Salma and Sita set about working on a plan. They decided that they just had to do something so that there would be enough water that summer.

They came up with a very clever idea.
Do you know what the girls did? They collected all the little plastic cups and boxes that they had in their toy-cupboards and took them into the backyard, where they set about arranging them in a neat row. They even brought along some pots and pans from their kitchens (luckily their mothers didn’t see them doing that!) Even though it wasn’t the rainy season, if one of these days it somehow happened to rain, or even just drizzle a bit, they reasoned, water would collect in the containers, and that might be enough for the entire summer.
Their parents, the girls were sure, would be very pleased with their plan when they found out.

*
“Hello! And what are you two busy doing?” Salma’s father called out as he walked to where the girls were. He had just returned from office.
“Uncle, we’re collecting water for the summer!” Sita replied. “On TV today they said there’s going to be a water problem.”
Salma’s father had heard that the summer was going to be very dry. But because he was so busy with work he hadn’t given it much thought. Now seeing Sita and Salma going about their plans to save water, he was very moved. No one else in the area”certainly none of the adults around”had cared to do anything at all about the water problem other than complain about it, while these little girls had come up with a very practical plan!
“Such a wonderful idea! I’m so, so impressed,” Salma’s father said. “You girls are so sweet, so helpful, and so clever, too! God bless you, children!”
*
Inspired by what Sita and Salma had done, the next day Salma’s father sent an urgent email message out to all the families who lived in the area, calling for a meeting to discuss the water problem. At the meeting, they decided on many things to save water and to make sure that there would be enough of it that summer. As you can imagine, everyone was very happy about that!
Just as the meeting was getting over, do you know what Salma’s father did? He brought Sita and Salma onto a makeshift stage and announced, “Friends! But for these girls, we wouldn’t be here together now. If it wasn’t for their wonderful idea of saving water in their toy cups, I don’t think I would have thought of calling this meeting”and then we wouldn’t have agreed on the things we plan to do to have enough water this summer. So, let’s give Sita and Salma a very, very big hand!”
The grown-ups in the hall stood up and clapped and cheered for the girls. Sita and Salma waved around a bit and burst out giggling. They weren’t used to that sort of attention, you see. And then, they scampered off the stage, heading to the backyard to check if any rainwater had collected in their toy-cups in the meanwhile!