Allah loves us all. Entrust all our worries to him. He is the best caretaker, and will not desert us in adversity. 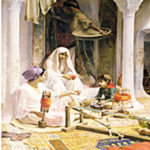 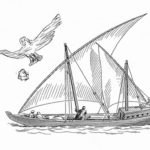 There lived a poor family in Baghdad in olden times. The man, Ibrahim, worked in the local fruit market while his wife Zulaikha tended the home and looked after their three kids. Ibrahim’s daily earnings were barely enough to sustain the family. Somehow, they made both ends meet and carried on with life. There was no way Ibrahim and Zulaikha could save anything for hard times.
ears rolled on and Ibrahim and Zulaikha continued with the same routine. One evening, Ibrahim returned home totally exhausted. It had rained heavily and he had got drenched completely. By midnight, he was having difficulty in breathing. And then, even before a doctor could be called, he breathed his last. The next evening, the family laid him to rest in the local graveyard. Zulaikha, now a widow, was left with merely ten dirhams that Ibrahim had saved for himself. ‘Ten dirhams, three adolescent kids and the vast road of life stretching before me! Why has Allah been so unkind to me?’ she asked herself.
Soon, however, Zulaikha gathered her senses, headed straight to the market, and bought some wool for five dirhams and groceries for the day from the rest of the money. By evening, she managed to weave a woolen headscarf, which fetched her ten dirhams in the market. She could now envision a pattern of livelihood for herself and the family. It became a routine for her to buy wool for five dirhams and spend the remaining money to buy essentials for the family. She could prepare a headscarf, a shawl or a pair of socks, which would ensure that the family could sustain itself the next day.
This schedule continued for a few months. As the days wore on, winter firmed its grip. Zulaikha thought to herself, “Why not warm myself under the winter sun while working with the weaving sticks and the spinning wheel?” But as she was going about arranging her things, a kite dived low, came over the cot, and grabbed the ball of wool! Before Zulaikha could realize what had happened, the kite had disappeared high up in the misty sky, along with the wool!
For Zulaikha it was a bolt from the blue! She was totally clueless as to what to do, and there was no way she could reclaim her only livelihood asset. Overtaken by grief and anxiety, she planned to visit Sufi Dawood Tai the next day. Dawood was a wise man and lived the life of a mendicant in a corner of the Abbasid capital. She reeled out her woeful tale before him and asked as to why Allah had been, so she thought, ‘so unkind’ with her. “How else would one explain the tragedy that has befallen me? First, Allah took away my husband and the breadwinner of the family. And now that I could somehow manage to carry on with my life, this asset of mine has been plucked away so mercilessly!” she lamented.
Dawood listened to Zulaikha’s sad saga in rapt attention. But before he could open his lips to reply, someone knocked at the main door. As the doors were flung open, he could see five men waiting to meet him.
Entering into his room, the oldest among them said: “Hazrat! Last evening we were sailing in a boat in the river Tigris. We found the boat to be tilting on one side. We discovered that the boat had developed a hole near the bottom and water was rushing in. Since we were in midstream, we thought we would definitely die now. At once, we all began praying to Allah to save us from what seemed to be our certain doom. We vowed to pool together a thousand dirhams between ourselves and give it away in charity if we came out alive from what we thought was an impending tragedy. No sooner did we proclaim our vow than a kite appeared in the sky and dropped a ball of wool from her claws. We all pounced upon it to plug it into the hole at the bottom of the boat. We began to take out water from the boat with a bowl, till at last the boat regained its balance.
“We disembarked near Baghdad this morning. We were advised to approach you for the appropriate guidance with regard to giving our charity for a worthy cause that could please Allah. Here is a bag with a thousand dirhams for you to spend in the way of Allah.”
Hazrat Dawood Tai collected the bag and entered the room where Zulaikha sat engrossed in her worries. Presenting the bag to her, he said: “Now it is up to you to decide if Allah has been kind or unkind to you. He will never leave his beloved servants in agony. His reservoir of mercy is limitless, and His love for them exceeds seventy times the love a mother has for her child!”
Moral: Allah loves us all. Entrust all our worries to him. He is the best caretaker, and will not desert us in adversity.
(Note: Central theme borrowed from an Urdu story)