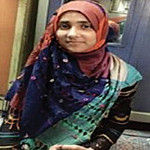 Raushan went to the court as many times as she was required to, and seeing her passion, Chief Justice Mohit Shah directed the college to admit her.

Raushan Jawwad, a 23-year-old student of KEM Hospital and College in Mumbai, secured first class in her final MBBS examination. This success comes eight years after she lost both her legs in a train accident near Andheri station in 2008. On that fateful day in 2008, Raushan was returning home after her exam in Bandra’s Anjuman-i-Islam Girl’s College. She approached the door near the station and lost her balance when other commuters started jostling. Her legs came under the moving train and hearing her scream, some commuters pulled the chain.
Raushan became “88% handicapped” after the accident. But, according to some existing rules in medical colleges, only people with up to 70% handicap can study medicine. With her passion to study and succeed in the field, Raushan moved the Bombay High Court because she had already qualified in the entrance exam and did not want her disability to come in the way of her dreams.
“Orthopedic surgeon Dr Sanjay Kantharia, who operated on me, helped me like I was his daughter. Even after the accident in 2008, I did not drop out and studied at home and appeared for exams. I cleared the state’s medical entrance exam, MHCET, and was later asked to go for a medical test for the handicapped at JJ Hospital. The doctors there said that as per rules, only students who had between 40% to 70% disability could be given admission in the MBBS course. I was denied admission as I had 88% disability,” she said..
Dr. Kantharia suggested she should move court. They met V. P. Patil, a senior lawyer, who agreed to take up the case for free. Raushan went to the court as many times as she was required to, and seeing her passion, Chief Justice Mohit Shah directed the college to admit her. “When she can come all the way to court why do you think she won’t be able to come to class?” he asked the college authorities.
Raushan is third among four siblings. Her father, Jawwad Shaikh, sells vegetables near Ismail Yusuf College in Jogeshwari. When MLA Ameen Patel visited her in the hospital, he offered to take care of her college education and finance the entire college fees. The enthusiastic girl is now mentally prepared for a PG course.
(Extracted from www.thebetterindia.com)