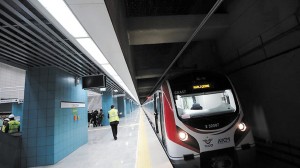 It is now possible to cross the Bosphorus Strait “ from Asia to Europe in just four minutes by the new Marmaray tunnel. It is the realisation of a project dreamt up by Ottoman sultans more than a century ago. Though it connects two continents, but connects only one part of Turkey with the other.
The tunnel is the world’s first connecting two continents and was inaugurated on the 90th anniversary of the Republic of Turkey.
It is 13 kilometres long and will carry subway commuters in Istanbul, which is Europe’s biggest city with a population of 15 million people. An estimated two million cross the Bosphorus Strait daily.
Work began in 2004 on what is one of Turkish Prime Minister Recep Tayyip Erdogan’s pet projects designed to change the face of Turkey. Eventually the tunnel will serve high-speed and freight trains.
Now the Marmaray tunnel, an immersed tube set in the seabed has joined the two continents.
About 1.4 kms of its full length is fully immersed some 60 metres below the surface. It can carry around 1.5 million passengers per day. The total cost was a little over 3.3 billion Euros.
But its free floating structure has been designed to withstand a quake with a magnitude of 9. Its interlocking construction means each section can be sealed off.
The Yenikapi station on the European side of Istanbul will showcase relics which were uncovered during the tunnel’s construction. Many date back as far as 8,500 years. The excavation site included a Byzantine port and 13 shipwrecks.