Who Invented the Car?

Islamic Voice 0 April, 2013 12:00 am
Eight-Year-Old Kashmiri Girl wins Gold in kickboxing
Spider
Why are the forests necessary for our environment? 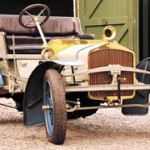 The world’s first car was designed and built by Karl Friedrich Benz in 1885. He was a German engineer. He integrated a combustion engine and an electrical ignition in a 3-wheeled carriage which moved by itself. Gottelieb Daimler and Wilhelm Mayabach later developed a similar vehicle on four wheels. Around 1900, the serial production of cars began. But American industrialist Henry Ford established the factory where cars could be produced in assembly line i.e., various components would be manufactured separately and will be assembled to give shape to cars. In earlier days, the petrol was sold only at the chemist shops, so car users would buy petrol  from there. Till then petrol had only medicinal uses.