From selling pens on the roadside to promoting awareness for blood donation, Hasan’s positivity will win you over! 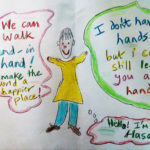 Hasan was born in a family of landless labourers in a remote village. He was the fourth and last child of his parents.  You might think that being the youngest, he would have been doted upon by his family. But no! He was born with just little stumps for hands, you see, and so was considered a useless good-for-nothing.
Hasan studied till primary school and then dropped out. No matter how much he studied, his parents thought, no one would ever give him a job because of his physical condition, and so what was the use of spending money on his education?

A Big City
As you can imagine, Hasan was very unhappy. He had hardly turned 13 when he made a major decision. He ran away from home! He got into a train, which took him to a big city, a thousand miles or so away. He hadn’t seen a city before. Almost everything there was new for him.
The day Hasan arrived in the city he was spotted by the owner of an eatery near the railway station. The kind-hearted man called him over and offered him some food. He sat with Hasan while the boy ate. In a short while, Hasan, who instinctively trusted him, had told him many things about himself, including why he had run away from home.
“You stay with me, dear,” the man said to Hasan, his heart filled with love for the child. “You are like my  own son. You can help me in the eatery. I won’t be able to pay you anything, but you’ll get food and a place to sleep.”
Hasan gratefully accepted the man’s kind offer.

Sense of Humour
A decade passed and Hasan had grown into a confident young man. He was deeply spiritual, with firm faith in, and love for, God. His very presence radiated positivity. He had a wonderful, innocent-sort of sense of humour. People who came to the eatery loved chatting with him. Seeing how cheerful he was despite his physical condition made them feel that there was still hope for the world, and for themselves, too. If he could be happy, they could, too.
In due course, Hasan got married and became the father of three children”two girls and a boy. He continued staying in the city, while his wife and children lived in his parents-in-law’s village.

Faith in God
When Sameer, Hasan’s son, turned six it was discovered that he had blood cancer. You can’t imagine how shaken Hasan and his wife were when they learnt this.
Hasan arranged for his wife and Sameer to come over to a cancer hospital in the city for the boy’s treatment. They put up in a tiny, over-priced room in a hostel near the hospital. The doctors informed Hasan that the treatment might take many months and that even then there was no guarantee that Sameer would get alright. They also said that the treatment would be quite costly.
Somebody else in Hasan’s place might have lost all hope, but not Hasan! His faith in God kept him firmly together. He knew God was supporting him all along, and that God would continue to do so.
Hasan realised that he needed to work in order to meet the expenses of Sameer’s treatment. He knew it would be difficult for him to get a job but he certainly did not want to beg.
Intelligent and Very Enterprising.
Hasan may not have been very ‘educated’ by the standards of the world but he was remarkably intelligent and very enterprising. Do you know what he did? On the suggestion of his wife, he went to a wholesale market and bought a bagful of pens of different colours and sizes and began selling them at traffic signals near the hospital. In a few days’ time, he was earning a fairly decent sum, enough to cover a substantial portion of Sameer’s expenses. Meanwhile, the doctors agreed to subsidize Sameer’s treatment.
It’s been four months since Sameer was admitted to the hospital. Hasan and his wife are still waiting for the day when he might be discharged. When Hasan isn’t out selling pens on the streets he’s sitting by Sameer’s side or taking him from one department of the hospital to another, for this or that check-up or helping his wife wash clothes or cook their meal. And if he isn’t doing any of these things, he’s busy helping new patients and those accompanying them in different ways: showing them around the hospital, taking them to the doctors, getting medicines for them, accompanying them to the blood-bank, and so on. Helping others gives him great joy and makes his life meaningful, Hasan says.
Hasan doesn’t know how long more Sameer’s treatment might continue. If Sameer is cured, he wants him to go back to the village and study and become a teacher. And as for himself, he wants to dedicate the rest of his life to promoting public awareness  about child cancer and its prevention. He dreams of cycling around the country (yes, he rides a bicycle, and with great confidence, despite his condition!) for this purpose because doesn’t want other people to go through what Sameer has, if it can be helped.
If there’s still hope for the world, it must have something to do with the fact that there are still good people like Hasan around, who, refusing to being overwhelmed by what  seem like impossible hurdles, turn them into a means for hope and joy for others.