Islami Baitul Mal Institutions – Carving a Future for Themselves

Consistent and steady effort has enabled a clutch of social activists in Bangarpet to set up several educational institutions. 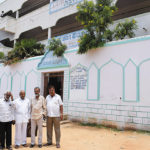 BMI office bearers in front of the High School 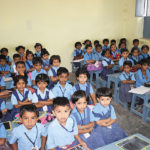 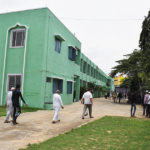 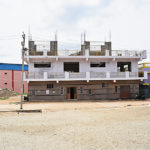 Marriage Hall within the Community Complex

If one is keen to see results of consistent work in a focused area, he must visit IBM group of institutions in Bangarpet, a taluka town, 66 kms east of Bangalore on the railway line to Chennai. IBM stands for Islami Baitul Mal which was set up in 1957 by some noted social workers of the town. The objectives were written in simple words. They were all guided by the common zeal to uplift the community from poverty by pooling their mutual resources. Providing small loans, organizing the marriage of destitute girls and providing help to anyone in genuine need were written down in the constitution. Area of operation too was clearly demarcated which besides the town, included nearby villages of Kuppam and Desahalli.
Today, six decades later, the IBM runs a string of educational institutions right from a primary school till a degree college providing affordable education to nearly 1,400 students. The schools are located around the Town’s old Eidgah. The 25,000 sq. ft. educational complex is ringed by a marriage hall, a dargah and a mosque, which neatly fit as mosaics of a community centre catering to various religious, cultural and educational needs of the community.

Visionary Effort
Bangarpet has a population of just about 1.25 lakh. The founders included 27 members, most of them local merchants with a couple of officials and contractors thrown in. The founding committee was headed by an advocate, late Janab M. Inayatullah. Till the early 1970s, they had only a small building. They visualized that unless the local populace was equipped with modern education, there were no prospect for the local youth to find jobs or to enter modern businesses. This propelled the visionary founders to set up the first IBM English medium primary school in 1968. This was upgraded into a secondary school by 1974. According to Mr. Syed Khalid Ahmed, currently vice president of the Society, the Pre University College had to wait till 2007 as the existing premises had no scope for expansion. But around June this year, the committee gathered courage to set up its IBM Degree College which commenced with B.Com classes. It came up on a new one-acre premises, a little away from the Eidgah.
Conscious of the weaker economic status of the people, the IBM had been helping nearly one-fourth of the school children with scholarships. Besides, the members of the school staff take pains to fill up huge number of applications for the pre-matric scholarships issued by the State Government’s Minority Welfare Department.

Collective Work
Team spirit between committee members played a significant role in taking the institutions forward. While the first President Syed Zaheer Ahmed Pasha, a landlord and contractor, struggled hard to get recognition for English medium schools, he was ably assisted by members like R. M. Muneer, Ansar Pasha, Ameer Pasha and L. Abdus Subhan. Of the five, only Mr. Subhan is alive today. Syed Muneeruddin, a retired headmaster of the Government School, who headed the institutions between 1983 to 2005 in various capacities, imparted quality to the coaching standards. A retired government teacher, Mr. Abdul Waheed was instrumental in laying a strong foundation for teaching of mathematics and science in the 1990s. Sheikh Ismail, a government employee who upon retirement became the President of the Town Municipal Council, put in strenuous effort in consolidating the land around the mosque, dargah, eidgah and the marriage hall to lend it the present shape. Sheikh Iqbal Ahmed, presently the secretary of the sub- committee on education, went into the legalese to get Urdu as the third language for the school. But for his effort, the officials would insist on either Urdu being taught as the first language or not being taught altogether. He has been serving the school for the last three decades voluntarily, taking meticulous care of all affairs from management to academics.
A former resident of the town who gathered fortunes abroad, funded the entire building of the college. Mr. Syed Najmuddin, an NRI based in the United States, has promised to help the college acquire land adjacent to the college for further expansion.
Looking at the scarcity of resources in the region, the consistent progress of the IBM group appears worth emulation. It is currently headed by Dr. Syed Tajuddin, whose father Muneeruddin played the stellar role in giving the institution a sounder academic foundation. The IBM plans to turn the college into a full-fledged degree college and add post graduation programme thereafter.
Consistent effort and steady progress has led IBM to expand its activities over the last six decades. Spirit of collective work and keeping the differences away for the common goal enabled the clutch of social workers to endow the small town with institutions that guarantee a bright future for the townsfolk.