An Auto Driver with a Heart of Gold 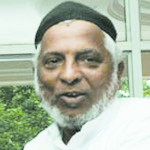 Abul Hassan drives poor people, pregnant women, patients and pensioners free of cost in his auto and buries or cremates forlorn bodies with his expenses.

“Live simply, think highly” “ this quotation is not from a philosopher or a highly educated person, but by a common man and autorickshaw driver “ Abul Hassan, who is known as ‘Armoor Gandhi’.
He does not agree that his selfless service to society counts as ‘social service’, rather he prefers to call it ‘service to mankind’. Born to Haji Hassan and Basheerabi in Armoor town ( Nizamabad-Telangana) in 1942, Abul Hassan developed an interest in social service when he was 15-years-old. He turned a Gandhian after reading about Mahatma Gandhi in 1965.
Interestingly, his late parents were also social workers. His only son Ahmed Hussain, who lives in Saudi Arabia and works as a driver-cum-carpenter, is also following in the footsteps of his grandparents and father.
Abul Hassan went to Mumbai as a mason and later to Muscat where he spent eight years as a construction worker and mason. Back home, he bought an autorickshaw and is eking out a living by driving it.
A portion of his income also comes from rent. He drives poor people, pregnant women, patients and pensioners free of cost in his auto and buries or cremates forlorn bodies with his expenses. He feeds at least four beggars at his home every day and as many as 20 poor persons during Ramadan. Every year, he extends financial assistance of Rs.1,000 each to ten poor students and Pratibha Awards to an equal number of meritorious students in SSC. He collects clothes and distributes them among the poor and destitutes. He always keeps a petrol can in his auto and gives fuel to vehicle users free of cost if their vehicle breaks down on the road. He provides drinking water to passersby by keeping water cans in his auto during summer.
He fills pits and potholes on the road with metal and soil and removes obscene posters and hoardings.
“Every religion is good. There are only two religions in the world “ peace and love and only two dharmas “ goodness and humanity,” he believes.
Hassan goes around slums and teaches poor students even today. “I believe that to serve people, no post is required. Similarly, we need not be rich for philanthropy, only a kind heart is enough.” He has garnered immense praise from the media and the Indur Apuroopa Foundation honoured him with its Award recently. n
(www.thehindu.com)