“Had it Not Been for Muslims, We would have Died”: Saints Injured in Utkal Express

Islamic Voice 0 September, 2017 12:00 am
Interfaith Children’s Book about Jewish and Muslim Boys
A Mushaira for Non-Muslims to Recite their Urdu Works
Nilambur: A Dowry Free Area 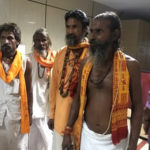 Meerut: “I remember my head bumping into the seat in front of me, throwing me at least two feet forward. I was in pain and could here screams from all directions. Honestly, if it hadn’t been for Muslims in the area who rushed to the spot and pulled us out of the train’s coach, we might not have survived,” said Bhagwan Das Maharaj, a saint with a saffron cloth tied around his neck. He was travelling with six other ascetics who had boarded the Utkal Express from Morana in Madhya Pradesh and were going to Haridwar to take a holy dip in Ganga. “They brought us water, khaats and arranged for a private doctor for us. We will never forget this gesture,” he added. Three saints from the group were injured and were rushed to Lala Lajpat Rai Memorial (LLRM) Medical College in Meerut for treatment. “We believe in God and we saw his power soon after the accident. There are times when people politicize Hindu-Muslim ties, but there has always been love between the two communities,” said Morni Das, another saint. Soon after 14 coaches of Haridwar-bound Kalinga Utkal Express derailed near Khatauli in Muzaffarnagar, government and private hospitals in Meerut were put on alert and emergency wards were set up for the accident victims. “There were many women and children in our coach. All of us were chit-chatting and suddenly our coach overturned. Initially, we didn’t realize what had happened,” said another saint Hakim Das. (TNN)