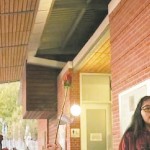 Houston: A group of young Muslims in Houston USA, spent the day at Discovery Green Park, handing out red roses and spreading a message of peace, ABC13 online news reported. “We just want to show people that this is a peaceful religion despite all the recent events going on, you know the San Bernardino shooting and stuff like that,” said Hakeem Ali. The roses had notes attached with a quote from the Quran: “Whoever kills a soul, .it is as if he had slain mankind entirely. And whoever saves one it is as if he had saved mankind entirely.” “It really brightened up my day. I like how much optimism is going around,” said Alex Saravia, who received a rose. “It just made my heart just melt because there’s so much negativity right now,” said Melissa Wiegand, who was presented with a rose.