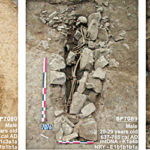 Archaeologists working in southern France have identified three graves that are believed to represent the oldest Muslim burials ever found in Europe, dating to the eighth century. The skeletons at a medieval site at NÃ®mes were found facing Mecca, and a genetic analysis showed their paternal lineage was North African, said the study in the journal Plos One. Furthermore, radiocarbon dating shows the bones likely date from the seventh to ninth centuries, suggesting they came from the Muslim conquests of Europe during that period. “Given all of these data, we propose that the skeletons from the NÃ®mes burials belonged to Berbers integrated into the Umayyad army during the Arab expansion in North Africa,” said the study. “We knew that Muslims came to France in the eighth century, but until now ,we did not have any material evidence of their passage,” Yves Gleize, an anthropologist with the French National Institute for Preventive Archaeological Research and lead author of the study, said. The graves were first discovered in 2006 near a major roadway in NÃ®mes as construction workers were digging an underground parking garage.
(Source: www.themuslimvibe.com)