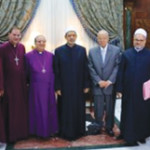 Cairo: Recently, over 200 Muslim imams and Christian priests gathered in Cairo to celebrate at the conclusion of the three-year Together for Egypt programme which brought together priests and imams to work side by side in humanitarian and social work. The celebration was the culmination of Together for Egypt, and the progress and success of the project was very clear. The priests and imams sat easily with each other, listening carefully to the speeches as one. Meanwhile, also in Cairo, another group of Christian and Muslim religious leaders recently met, to discuss intercommunity relations and the scourge of violence in the name of religion. They were part of the 12th annual Christian-Muslim dialogue meeting between the Anglican Communion and the Al-Azhar, Cairo, The meeting in Cairo took place at Al-Azhar, and the participants were welcomed by the Grand Imam of Al-Azhar, Dr Ahmed Al-Tayyeb. The meeting focused on how religious leaders can combat violence done in the name of religion and extremist ideologies.
At the end of their dialogue, the Christian and Muslim leaders issued a communiqué, signed, among others, by the Anglican Archbishop of Egypt, the Bishops of Bradford and Southampton, the Secretary for-Inter Religious Affairs to the Archbishop of Canterbury, the Chair of Al-Azhar’s Committee for Interfaith Dialogue, the Vice President of Al-Azhar University, and the Secretary-General of Al-Azhar’s Islamic Research Academy. The communiqué exhorted Anglican Christians to understand Islam and Muslims to understand the Christian faith, and for both to work together in solving problems and conflicts between Muslims and Christians in different parts of the world. The signatories to the communiqué concurred that terrorism is an aggressive ideology that must be combated with sound teaching.